Frontex to boost EU border mission in Greece | Europe | News and current affairs from around the continent | DW | 03.03.2020

Faced with a migration surge, Frontex will send more personnel and equipment to Greece to secure the EU's external border. The border protection agency has become increasingly important since the 2015 refugee crisis. 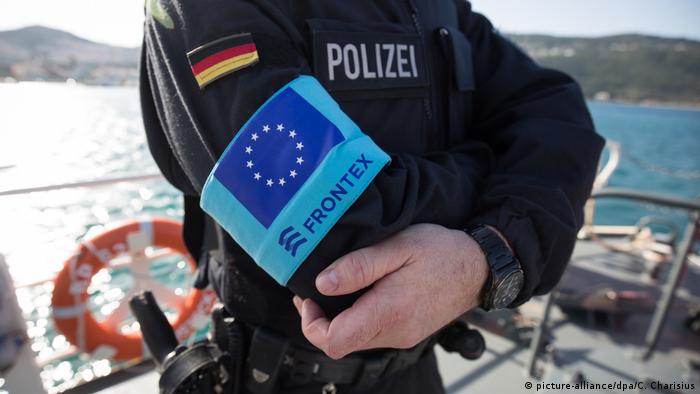 When the situation along the EU's external borders escalates, the European Border and Coast Guard Agency, or Frontex for short, is called in for support. The latest EU member state to turn to the agency is Greece, which has requested help to bolster its border with Turkey.

In emergency situations Frontex can send in up to 1,500 extra border guards, which EU member states must assemble within five days. According to the quota, Germany must contribute 15% of these emergency border guards.

Emergency Frontex missions are designed to take pressure off of an EU state, especially when "large numbers of non-EU nationals [are] trying to enter its territory illegally."

Frontex personnel aren't independent; instead, they're coordinated by the EU member state which requested their help. This means Greek authorities will work out an action plan together with Frontex to decide, for instance, when the use of live ammunition is permitted. A coordinating Frontex officer will then oversee the implementation of the plan.

The agency, which was established in 2004 and has its headquarters in Warsaw, has gained importance in recent years. Frontex's mission is to maintain "safe and well-functioning external borders." The agency's executive director, Fabrice Leggeri, said that in order for people to move freely within the Schengen Area, the EU needs a "common management of the external border."

At the height of the 2015/2016 refugee crisis, it became apparent that several EU states were simply overwhelmed by the sheer number of asylum-seekers headed their way. This pressure on the EU's external borders caused some states to question the bloc's internal open borders principle. And to this day, EU states still haven't agreed on a fair redistribution of recognized refugees throughout the bloc.

Taken together, these factors have prompted the EU to instead focus on bolstering measures to curb irregular migration. By 2027, the agency plans to boost personnel to 10,000 officers. Its budget has also grown tremendously, amounting to €1.6 billion ($1.7 billion) in the coming year.

Until 2014, Frontex is said to have regularly pushed boats carrying asylum-seekers off course in the Mediterranean, thereby preventing individuals from submitting asylum applications. Ilkka Laitinen, who ran the agency at the time, even admitted to these practices. Since then, Frontex missions have operated with greater restrictions.

Several years ago, the agency established a consultative body with representatives from various aid agencies, the Red Cross and the United Nations. Stefan Kessler, who heads the body, told DW in August 2019 about its limited influence. "Only EU member states who are on the management board, along with two EU Commission civil servants, control Frontex. There is no effective way to control the agency from the outside," he said.

And that has once again become apparent in recent days. Sebastian Koch, of human rights group Seebrücke, said Tuesday that "we cannot look on as the Greek military and Frontex fire tear gas, flash grenades and water cannons at children, women and men." And Ulrich Lilie, who heads Protestant charitable organization Diakonie Deutschland, said "the violence used by Greek border police and Frontex against refugees has reached an unprecedented level."

The EU, however, appears determined to prevent any unchecked migration into the bloc. On Tuesday, EU Commission President Ursula von der Leyen announced plans to deploy several coast guard vessels, two helicopters and other aircraft, three thermovision vehicles and add 100 border guards to the 530 Frontex already has in Greece, along with €700 million in assistance.

"The situation at our border is not only an issue for Greece to manage, it is the responsibility of Europe as a whole," said von der Leyen. "We will hold the line and our unity will prevail."

Thousands of migrants and refugees have gathered at the Turkish-Greek border, desperate to make it into the European Union. DW correspondent Tunca Ögreten spent two days there, and reports a volatile situation. (03.03.2020)