German Chancellor Angela Merkel said Turkish President Recep Tayyip Erdogan's decision to bus thousands of migrants from refugee camps to Turkey's border with Greece was the wrong approach, even if Ankara "currently does not feel sufficiently supported" by Europe.

"But despite all the willingness to negotiate on providing yet more support [for Turkey], it is wholly unacceptable to then take this out on refugees," Merkel said of Erdogan's decision. She said he was leading desperate people into a "cul-de-sac," with Greece already making it clear it does not intend to grant them entry.

German Foreign Minister Heiko Maas added: "We must not allow refugees to be made the plaything of geopolitical interests. No matter who tries to do so, they must always expect our resistance."

Their comments followed soon after Erdogan had threatened to increase the rate of new arrivals at Turkey's border with Greece.

"Hundreds of thousands have crossed, soon we will reach millions," Erdogan said in a televised speech. The United Nations' migration organization estimates the number to be much lower, at around 13,000 people.

"After we opened the doors, there were multiple calls saying 'close the doors,'" he said. "I told them 'it's done. It's finished. The doors are now open. Now, you [Europe] will have to take your share of the burden."

Turkey declared its border to Greece open for the millions of displaced people currently in the country in a bid to pressure the EU into supporting Turkey's role in the conflict in Syria.

The build up of migrants along the Greece-Turkey border has caused fears of a repeat of the 2015 European migrant crisis, in which more than 1 million people crossed into Europe. 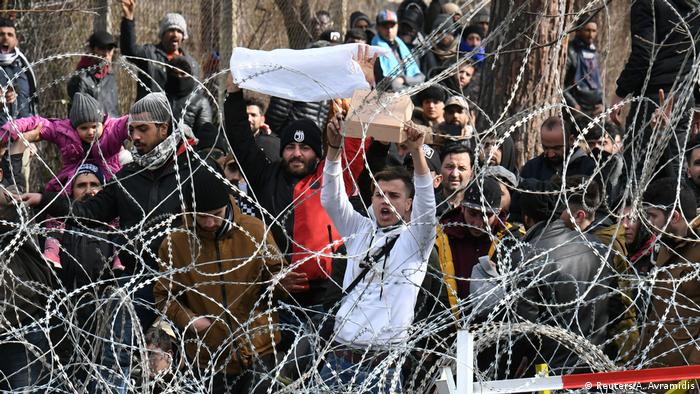 A deteriorating situation in Greece

There has been nearly 10,000 attempts to cross Greece's northeastern land border in the past 24 hours.

A further 1,000 migrants arrived on the shores of its Eastern Aegean Islands including Lesbos and Samos since Sunday night.

The country has declared its highest alert level in response to the crisis and Prime Minister Kyriakos Mitsotakis promised to step up land and sea patrols in the country's northeast.

An internal document from the European Union border enforcement agency Frontex showed that it is predicting a "massive flow" of people that will be difficult to stop, reported German daily Die Welt.

DW's Florian Schmitz reported hearing gun fire as he tried to drive up to the over-capacity Moria camp on the Greek island of Lesbos. The camp is one of several migrant camps holding migrants who have crossed the Aegean Sea from Turkey.

Islanders have set up road blocks to try and stop transfers of migrants to Moria. Those who do make it are facing long waits in the cold to be processed.

Julia Hahn, DW's Turkey correspondent, said she saw tear gas and water cannon being used by Greek border guards against migrants. She also cited "disturbing" reports from some migrants of so-called illegal pushbacks — where migrants are forced back across a land or sea border having crossed it.

"If confirmed, these illegal pushbacks at an EU border would be a violation of human rights and of refugee law," said Hahn.

What is the EU doing about the crisis?

The EU Foreign Affairs Council has scheduled an "extraordinary" meeting this week at the request of the Greece.

The offensive on Syria's Idlib province is forcing thousands of civilians to flee, many of them to Turkey. Turkish President Erdogan has now warned that a deal on refugees with the EU is in jeopardy. (28.12.2019)