What you need to know about the escalation in Syria′s Idlib | World | Breaking news and perspectives from around the globe | DW | 28.02.2020 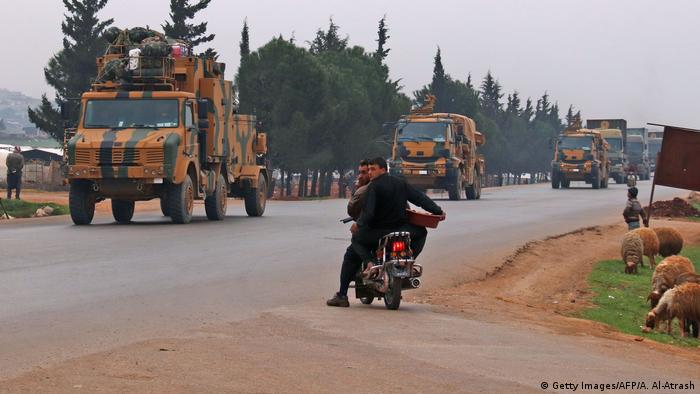 Why is Turkey calling for NATO backing?

As a NATO member, Turkey is well within its rights to call for support from partners. Ankara has already acted on that right, calling for NATO assistance and consultations. Article 4 of the alliance's treaty stipulates, "The parties will consult together whenever, in the opinion of any of them, the territorial integrity, political independence or security of any of the parties is threatened." NATO Secretary-General Jens Stoltenberg reacted to the Turkish request and voiced support for Ankara during the extraordinary consultation. He condemned attacks on Idlib province carried out by Syria and Russia, calling for both parties to "respect international law."

Where is the fault line between Ankara and Moscow?

The conflict between Russia and Turkey in Syria has been escalating for months, and their individual interests could not be more divergent. Moscow has been a steadfast partner to the Syrian regime as it has conducted massive bombing raids in Idlib in an attempt to win control over the last rebel stronghold in Syria. Turkey, for its part, is a sworn enemy of Syrian strongman Bashar Assad and has thrown its support behind opposition militia groups. The Russian International Affairs Council (RIAC), a think tank, compared the current airstrike targeting Turkish soldiers to an incident that occurred in the fall of 2015 when Turkish fighter jets fired on a Russian bomber.

How has Russia reacted?

Moscow has accused Ankara of escalating the situation. The Russian Ministry of Defense also claimed that Turkish troops were operating alongside "terrorist fighting units" when they were attacked by Syrian forces. The ministry accused Ankara of failing to uphold promises made during negotiations in Sochi, Russia, by failing to ensure a clear differentiation between regular opposition forces and "terrorists" in Idlib. The journal Russia in Global Affairs took to Facebook to point out that Turkish President Recep Tayyip Erdogan had "upped the ante" in an effort to force Russia into a corner and "test its resolve as a partner to Damascus."

Is there anything that unifies Turkey and Russia?

Despite the current conflict of interests, Turkey and Russia have close economic ties. Their most important collaborative project to date, the Turkish Stream gas pipeline, began operations in January. Turkey is also heavily dependent on Russian tourism. When Moscow reacted to the 2015 jet incident by placing a travel ban on Russian citizens seeking to vacation in Turkey, it translated into huge losses for the Turkish tourism sector. The two countries also share close defense relations. Most recently, and much to the chagrin of its NATO partners, Turkey decided to purchase Russian S-400 missile defense systems in 2019. Much of Idlib is in ruins

Is a diplomatic solution possible?

At the moment, the chances of a diplomatic solution seem slim. According to Ivan Starodubzev, an expert at RAIC, Moscow has no interest in an Istanbul summit with  Erdogan, Putin, German Chancellor Angela Merkel and French President Emmanuel Macron any time soon. Starodubzev said Moscow will instead flex its muscles, preferring to join such a summit only after it has achieved "a significant battlefield victory in Idlib."

Is a new refugee crisis likely?

According to United Nations statistics, some 900,000 people have fled the fighting in Idlib since December 2019. The displacement of hundreds of thousands of people is also the main reason Ankara has condemned the Syrian government's military offensive in Idlib. Turkey has already taken in some 3.6 million Syrian refugees, and Ankara fears that as the situation in Idlib deterioratesit could set off another massive wave of refugees seeking safety in Turkey. A further concern is that Islamic terrorists could use the opportunity to sneak into Turkey alongside citizens who truly need protection. The Turkish Ministry of the Interior has said, "In order to ensure that there are no jihadis among those people, we will assess all risks before opening our border."