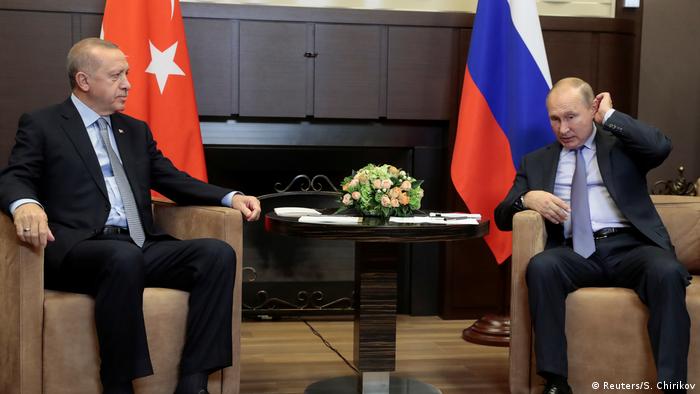 Vladimir Putin is in a hurry. He wants to declare victory in the Syrian war as soon as possible. The Kremlin has bailed out the regime of Syria's Bashar Assad from a seemingly inevitable defeat — at an enormous human cost. The only hurdle remaining for Russia and its Syrian client is the province of Idlib, which anti-Assad forces still control. It is a drag on Putin's other plans.

For one, he needs to finish a very important domestic project: amending Russia's constitution in a nationwide plebiscite on April 22. The amendments – which are still a work in progress – will ensure that he retains control over the political system as well as major policy and personnel decisions well beyond the end of his fourth term in office in 2024. Several public opinion polls indicate that Russians are not enthusiastic about the Kremlin's foreign wars. Yet another "ultimate" victory in Syria (Putin has announced a withdrawal of Russian troops from the country at least twice before) will serve him well at home.

Secondly, buoyed by French President Emmanuel Macron's overtures at the Munich Security Conference, the Russian strongman is looking forward to a gradual unfreezing of relations with the EU, if not complete normalization.

This may be achieved if — and this is a third reason the Kremlin is in a hurry in the Middle East — he manages to convince the Europeans to put pressure on Ukraine's leadership to accept Russia's terms of ending the conflict over the secessionist eastern regions of Ukraine, which are now effectively under Moscow's control and protection.

To achieve all this Putin needs to leave the Syrian quagmire behind. His — not totally unfounded — calculation is that the West will forget about its earlier accusations of war crimes against the Russian forces once there is at least relative peace on the ground in Syria.

But that calculation is not without risk. The Kremlin's plans for a quick Syria fix have put it on a collision course with someone who looked like an ally only a few weeks ago: Turkey's president, Recep Tayyip Erdogan. Now the two countries are on the brink of direct military confrontation, especially since 33 Turkish soldiers were killed in an airstrike on Thursday. The official line in Damascus and Moscow is that it was the Syrians who hit the Turkish military in an area where they should not have been.

The suspicion, however, is that the Turks were hit by the Russian Air Force — which provides air cover and support for Assad's ground forces.

Erdogan spent the last two years flaunting his independence inside the alliance, buying Russian air defense missile systems and co-hosting Syrian peace talks in the Russian resort of Sochi while ignoring the US and other Western allies. Now he needs more than just assurances of solidarity from NATO headquarters in Brussels to counter Putin's moves. In a desperate bid to attract Western support, he opened Turkey's borders to let more than a million refugees from the Syrian civil war and elsewhere cross into the European Union. Erdogan sees this threat to replay the 2015 refugee crisis as a tool to force the leaders of European countries to act quickly and put pressure on Putin.

The irony of Erdogan spending so much time and effort to distance himself from NATO and the EU and now clamoring for their help will not be lost on the Russians. Still, the Kremlin's risky strategy could backfire if Erdogan decides to press on with a ground offensive against Assad's army and deploys Turkey's air force. In the "who blinks first" game, it is not clear who will carry the day.

This conflict may still end to Putin's satisfaction — if he acts quickly enough on the ground in Syria to preempt any Turkish action. Massive bombardment of Idlib would achieve it; civilian casualties were never of concern to Putin and his generals. Or perhaps some kind of shaky compromise was cobbled together after he spoke with Erdogan on the phone Friday. But in the long term, Putin may have created new problems for himself.

Erdogan will never forget his humiliation by Russia. It weakened him domestically and in the eyes of NATO allies. He may well start repairing relations with the alliance. He will not be making peace with the Assad regime, which means that Putin's dream of leaving Syria behind may not come true.

Pakistan: Elephants treated after years of dental pain 10m ago

Opinion: Olaf Scholz should have shut down Mahmoud Abbas — he failed 3h ago

Opinion: Keep out! No more tourist visas for Russians during wartime 15h ago