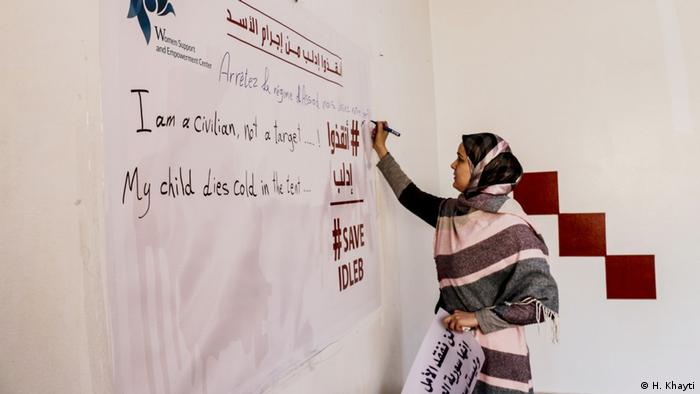 "I'll call you back later," says a hurried Huda Khayti as she cuts short our interview on the situation in Idlib. Then she hangs up. This is how our communication has been going for days, as bombs — dropped by Syrian government forces — rain down on Idlib. Khayti, the director of the Women Support and Empowerment Center Idlib, promises to find a new place to call from, one she hopes will be safer.

This happens repeatedly, several times a day. Finally, hours later, the phone rings again and she tells me she is fine.

"That's the way life is in Idlib, in the city but also across the whole region. It has been that way for years. No one is safe here. But I have a good network," the 40-year-old Syrian says. "We have a kind of early warning system for air raids — we can literally smell the bombs and we can pretty well tell where they will hit."

She says many residents have developed a sixth sense for attacks over the years.

Khayti has lived in Idlib since the spring of 2018. At the time, all those opposed to the Syrian government, whether members of the democratic opposition or militant rebels, were brought to Idlib province — controlled by the Islamist group Hayat Tahrir al-Sham — far away from the Assad regime.

"I had never been to Idlib. I had no idea what to expect," says the women's rights activist. But she knew it was just a matter of time before Syrian President Bashar Assad — bolstered by Russia and Iran — would try to capture the last rebel stronghold in Syria. Neighboring Turkey, on the other hand, has thrown its weight behind Assad's adversaries.

Since Syrian and Russian forces began their offensive on Idlib last December, some 900,000 people have fled the province, most of them women and children. Today, people continue to abandon their homes and their villages. Roads leading north to neighboring Turkey are jammed with cars full of people forced to flee for their safety, some for the third or fourth time. It seems the fight for Idlib is destined to be the last bloody battle of the Syrian civil war.

Khayti got a taste of just how gruesome such battles can be back in her hometown of Duma, and then in eastern Ghouta, outside Damascus.

"I'm from Duma. I survived one of the regime's poison gas attacks. I know what it's like to live and cower under a hail of bombs," she says. "But every bomb they drop on us here in Idlib only steels my resolve, and confirms to me that it was right to stay here and fight for Syria and for the Women's Center." 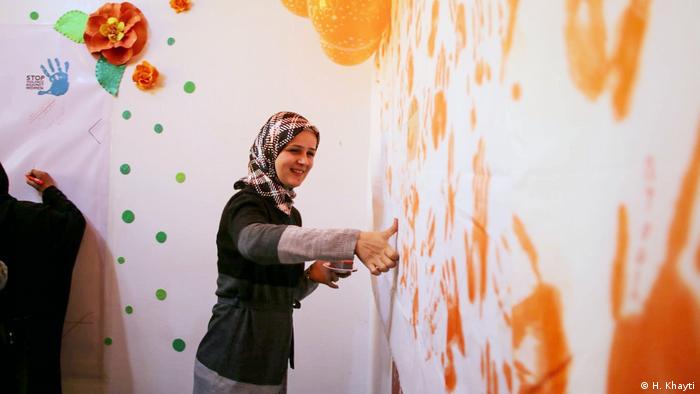 Khayti: 'I'm here because I know it's the right thing to do. I want to stand up for the Syria I want to live in'

Blacklisted by the regime

Khayti grew up in Duma before moving to Damascus to study French literature. She says her own personal revolution began in 2011 when she realized Assad's government was restricting women's rights and bullying its own people.

It was then that she started three women's centers in eastern Ghouta, where women could take workshops on a number of different subjects ranging from gender-based violence and first aid to English and women's rights.

She says all of the centers in eastern Ghouta were bombed. One of those bombings killed a colleague and her child. Khayti's brother was also killed, devastating her and her family. Her voice becomes melancholy as she speaks of her family: "We did a lot together — we ate together, we depended on one another — we were all very close."

Khayti says her parents, six sisters and one surviving brother are spread out across the globe, with some in Turkey and others in Canada. Only a handful of relatives are still in Damascus.

"I can't go back to Damascus. I'm certain that I'm on one of the regime's blacklists," she says.

That is because she was in favor of the revolution from the very start. She is against Assad and for regime change — for a democratic Syria. She says the revolution deepened her understanding of civil rights and women's autonomy. "I truly believe it was right to stand up and protest."

Alone in Idlib, but undaunted

Khayti was alone when she came to Idlib with others from eastern Ghouta and Duma in 2018. Her parents and her brother had already fled to Turkey. Her voice trembles whenever she speaks of them. But then it grows more confident again: "I wanted to stay in Syria, to go to Idlib. There is a cross-section of Syrian society here. Refugees from Homs, Aleppo, eastern Ghouta, but also people from right here in Idlib. I spent three months trying to find out as much as I could about society here — what the people needed. Soon, I was able to win people's trust."

And Khayti is unshakeable in her mission. With support from the aid group Medico International she quickly built up the Women Support and Empowerment Center Idlib, once again offering courses on a variety of pertinent subjects. She says Islamists in Idlib leave her and the group of regional women she works with alone.

On the telephone, Khayti explains that the center is in the heart of the city, near the market. She says the location makes it easy for everyone to reach and that she sometimes has as many as 25 visitors a day. Though, she adds, depending on how heavy bombings are on any given day, that number may be as low as three.

Life is particularly difficult for women during times of war. The economic situation is disastrous, many have experienced violence and others are traumatized. Infrastructure such as medical care and schools are also wholly lacking, forcing many mothers to teach their children at home. Some subjects like English are available to mothers at the center.

Still, Khayti says they can't plan for the future. "We have to take things as they come each day — whether at home or in the center. There is no such thing as normal everyday life, the bombardments can start at any time." 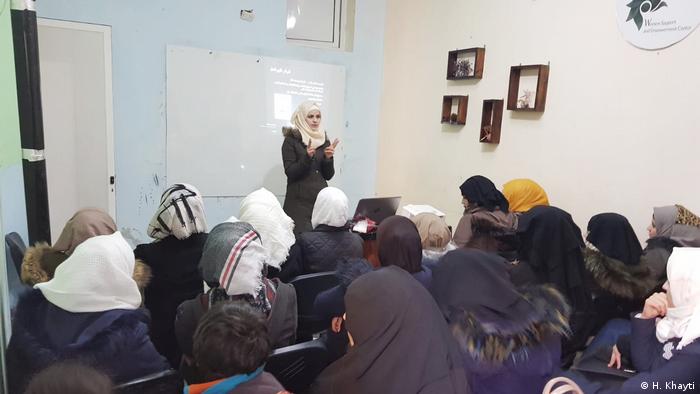 At the women's center, Khayti sometimes has as many as 25 visitors a day

Longing for her parents

Despite her situation, the revolution goes on for Khayti. She says her fight to help improve the situation for women has nothing to do with where she happens to be at any given time: "I'm here because I know it's the right thing to do. I want to stand up for the Syria I want to live in."

Khayti lives by herself. She never married and she has no children. "I'm only responsible for my own life," she says, "but I really miss my parents." When she decided to relocate to Idlib she had to make a promise to her father. When they parted, he pleaded with her: "Please don't break my heart. I don't want you to suffer the same fate as your brother." Khayti says she thinks of her father's words often.

"If Assad's troops do eventually take Idlib I'll have to flee to a refugee camp in the north and try to get across the Turkish border. I can live with the bombs, but I can't live with the thought that Assad will be in charge of Idlib and the whole of Syria."

The Russian president may have outfoxed his Turkish counterpart in Syria, but he ruined their friendship in the process. And this time Vladimir Putin's careful calculations could backfire, writes Konstantin Eggert. (28.02.2020)