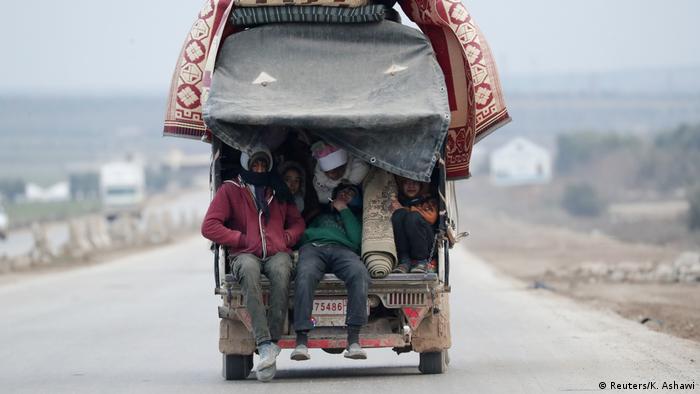 The European Union on Friday condemned Syrian government attacks on the city of Idlib, warning that a humanitarian disaster was underway.

"The renewed military offensive in Idlib by the Syrian regime and its backers, causing enormous human suffering, is unacceptable," said the EU Council in a statement.

The United Nations Secretary General Antonio Guterres on Friday also called for an immediate ceasefire in the region "to avoid an uncontrollable escalation."

"The unfolding crisis in northwest Syria and the terrible human toll on civilians'' is now advancing into areas with the highest concentrations of people — many of them displaced — and threatening to strangle humanitarian lifelines."

Erdogan and Putin in talks

Putin and Erdogan agreed to "intensify bilateral consultations on Idlib with the aim of reducing tensions, guaranteeing a ceasefire and neutralizing the terrorist threat", the Kremlin said in a statement.

Erdogan "stressed that the regime should show restraint in Idlib" and joined calls for the humanitarian crisis to be stopped.

Putin told Erdogan he was "seriously concerned" by the "aggressive actions" of insurgents in Idlib province.

The EU statement was released after the EU budget summit began on Thursday. As he arrived for the summit, French President Emmanuel Macron also roundly decried the humanitarian crisis in Idlib.

"For weeks, one of the worst humanitarian dramas has been unfolding," Macron said.

"I wish to condemn in the strongest terms the military attacks carried out for several weeks by Bashar Assad's regime against the civilian population of Idlib," Macron added.

The EU also vowed to deliver new aid to civilians in Idlib. The military offensive in Idlib has led to many reported deaths in the battle between Turkish-backed insurgents and Russian-backed government forces.

The offensive has led to mass displacement, with the UN estimating 900,000 people have been displaced in "horrendous conditions" since December 1. Approximately 500,000 are children.

It is estimated to be the biggest refugee exodus since World War II.