German Foreign Minister Heiko Maas said the attacks in Idlib province in Syria, "must have an end." He called for a political solution to the crisis, in an interview with a German newspaper.

The recent attacks on civilians in the war-stricken province where millions have fled intense fighting was a "humanitarian catastrophe" Maas said in an interview with the German daily Süddeutsche Zeitung.

He added that images coming out of the province had awoken feelings of "anger and frustration" in him.

Fighting in recent days between Russian-backed Syrian government forces, under leadership of Syrian President Bashar al-Assad, and Turkey-backed insurgents has intensified. Assad's forces are seeking to reclaim ground held by insurgents around Idlib, but Turkey has been pushing back, hoping to avoid the millions of civilians in the region from spilling over its border. Deaths of civilians, including children, are increasingly being reported.

"There is a Turkish-Russian arrangement there for de-escalation. Unfortunately we currently have the opposite."

Maas also stated that a solution involving Turkey, Russia and President Bashar al-Assad was necessary to end the war.

Germany had made it "very clear" to Russia that it must assert its influence on the Bashar al-Assad regime, but that "Assad must accept the gruesome deaths of an unprotected population that he has caused in Syria." 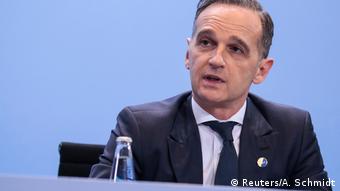 Germany's top diplomat Maas: The Turkish-Russian arrangement in Syria has done "the opposite" of de-escalation

Germany's foreign minister also sees a role for Germany, saying his country is doing everything "to afford contributions to de-escalation."

He added his voice to growing concern that the violence would cause a new wave of refugees to flee over the border to Turkey — the country has already taken in around three million refugees.

The limits of German influence?

Julia Hahn, DW's Turkey correspondent, said Maas' comments are in-line with international and regional opinion on the conflict and humanitarian conflict in the region, such as the UN warning that 700,000 people had been displaced since December 2019.

She added that Maas' references to deals such as the Russia-Turkey 2018 safe zone agreement that had "collapsed on the ground" showed the limits of German and European influence in the region.

Russian and regime bombardment have killed 14 people, including children, in Idlib province. German officials have called for the offensive to end, saying the humanitarian situation "is already catastrophic." (03.02.2020)