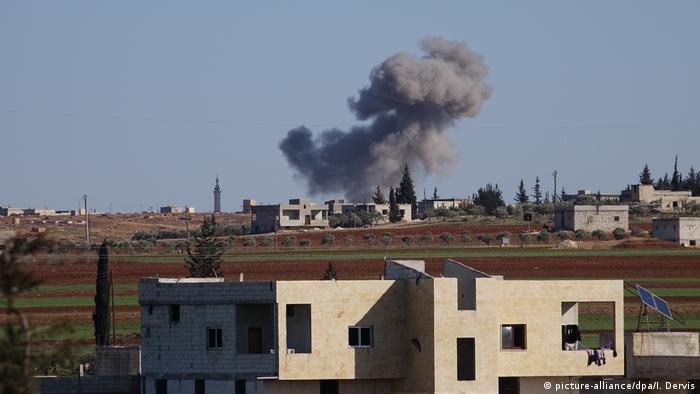 Airstrikes in the village of Abyan, Aleppo province, killed nine civilians, including six children on Monday morning, as the coalition of forces loyal to the governments of Russia and Syria continues its bombardment to drive out opposition fighters.

"Our fire support vehicles immediately fired on the targets with intensity and the necessary response was given," Turkey's Defense Ministry announced.

The attack came as President Bashar Assad's forces waged an offensive in Aleppo province to retake a key highway, according to the British-based Syrian Observatory for Human Rights (SOHR).

A week ago, an attack by the Syrian army killed eight Turkish military and civilian personnel and prompted fierce retaliation from Turkey.

The death toll of nine on Monday morning added to the at least 20 killed in the past 24 hours in Aleppo province and the neighboring Idlib province by Russian airstrikes, according to the SOHR.

Ibrahim al-Hajj, a spokesman for the White Helmets rescue team, told the dpa news agency that most of the killed and wounded were Syrian refugees who had fled for their lives from Aleppo's countryside during the latest round of attacks. "The situation is really tragic," he said.

The death toll from the attack could rise, owing to several people still trapped under rubble and others who were rescued but remain in critical condition, according to the SOHR.

Moscow in the Middle East: Putin the power broker?

Moscow in the Middle East: Putin the power broker?

On Monday, Turkish media reported that Turkey had been deploying more units to Idlib. The armaments included rocket launchers, armored transports and German-made Leopard tanks, according to cited sources.

Syria's government, backed by Russia, has been waging a campaign since December 2019 to try and take back the last rebel-held territory located in Idlib and parts of the nearby Aleppo region.

The latest bout of violence has killed more than 350 civilians. On Monday, the UN reported that about 689,000 people have been displaced by the Russian-backed offensive since December, and a total of 29 civilians were killed by the bombing in the previous 24 hours.

An analysis of text and video messages from jihadis in Idlib reveals over 60 Germans among their ranks, German media has reported. Syrian President Bashar Assad is determined to retake the region. (09.02.2020)