The number of those displaced due to the conflict in the region is now believed to be 900,000. The UN's relief chief said "individual interests" should not stand in the way of the humanitarian operation. 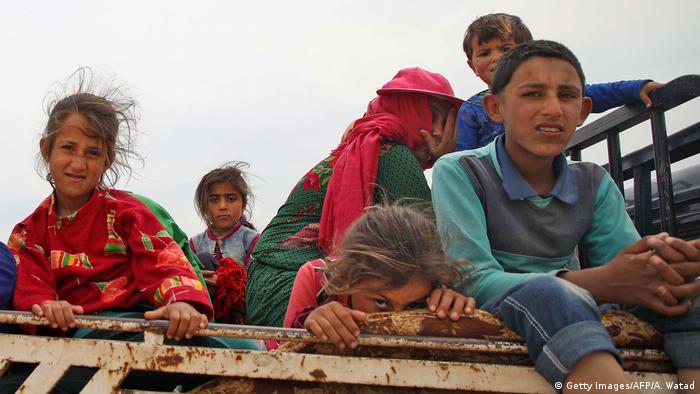 The crisis in northwest Syria has reached a "horrifying new level," according to a United Nations statement released on Monday.

The UN now believes the number of people displaced by the violence in the region to be 900,000, which is 100,000 more than it had previously recorded.

Mark Lowcock, the UN chief for Humanitarian Affairs, said the majority of those affected are women and children who are "traumatized and forced to sleep outside in freezing temperatures because camps are full. Mothers burn plastic to keep children warm. Babies and small children are dying because of the cold."

The Idlib region, including areas of neighboring Aleppo province, is home to roughly 3 million people, half of them already displaced from other parts of Syria.

The press release continued: "The violence is indiscriminate. Health facilities, schools, residential areas, mosques and markets have been hit. There is a serious risk of disease outbreaks. Basic infrastructure is falling apart."

"We are now receiving reports that settlements for displaced people are being hit, resulting in deaths, injuries and further displacement. A huge relief operation across the border from Turkey is underway, but it is overwhelmed."

Even humanitarian workers themselves are being displaced and killed as a result of the crisis. Lowcock said emergency measures needed to be undertaken to avoid "the biggest humanitarian horror story of the 21st Century" and that individual interests needed to be overcome to aid the humanitarian operation. The statement concluded: "The only option is a cease-fire."

A Russia-backed government offensive in Syria's Idlib has brought Turkish forces into direct confrontation with President Bashar Assad's troops. That threatens to unravel a fragile agreement between Turkey and Russia. (11.02.2020)