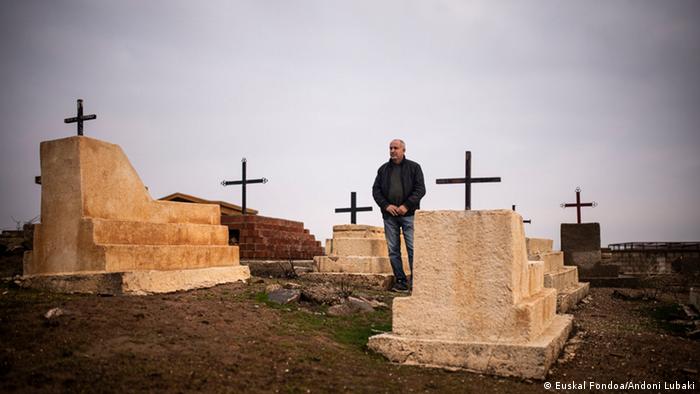 The main street of Tal Hafyan in Syria's northeast is as packed as ever, but almost no one is from here.

"A local family? I think there's still one in that house but I couldn't tell," said a man among a group of five struggling to get a car out of the mud. Most of those here are displaced families from Ras al-Ayn, one of the Syrian locations under control of Turkey's proxy militias.

Turkey launched its incursion into the area last October to target the People's Protection Units (YPG). Ankara deems the YPG — which spearheaded the fight against "Islamic State" (IS) — a terrorist threat linked to the Kurdish Kurdistan's Workers' Party (PKK).

Three months into the offensive, more than 200,000 people have been displaced, according to the United Nations. Many are settling in the empty houses left behind by local Christians in the Khabur Valley. Edmon Lunan is among the few local villagers who have ruled out leaving Tal Hafyan.

"We were 35 families in this village, all of them Syriac and Assyrian Christians, but most fled in February 2015 after the breakup of IS in the area," Lunan told DW. Although some came back after the fall of the caliphate, the recent Turkish offensive has forced most to leave again. According to Lunan, only three Christian families remain in Tal Hafyan.

The recent history of the Christians of the Khabur Valley is a nightmare in a loop. They are descendants of those who fled Anatolia during the 1915 genocide. Iraq was a first stop for many, but life there was far from easy either. After a massacre in northern Iraq in 1933, many crossed to French-controlled Syria, where they settled along the Khabur River.

Once a thriving community of 15,000 individuals in the Khabur Valley, local NGOs say there are a "few hundred" left in the area following the IS offensive in 2015.

"It was IS back in 2015 and it's very much the same people right now," said Lunan. Videos continue to emerge of Turkish-backed Islamists committing atrocities against civilians.

In a report released last November, Human Rights Watch accused Turkey's proxies of "executing individuals, pillaging property, and blocking displaced people from returning to their homes." A few days after the start of the offensive, Amnesty International had already pointed out "damning evidence of war crimes and other violations by Turkish forces and their allies."

In an interview conducted in Qamishli, the main city in Syria's northeast, Sanharib Barsoum, leader of the Syriac Union Party, denounced the "aggressiveness" of Turkey. "It's not just about Kurds or Christians, it's very much the entire Syrian people who are being targeted by Ankara," he told DW.

Just two kilometers (1.2 miles) away from Tal Hafyan, the picture in Tal Nasri is very much the same: hundreds of displaced families gather in the muddy streets while they wait for food and blankets to be handed out by local NGOs. At the entrance of the village, a group of kids play amid the rubble of the Virgin Mary church. The temple was destroyed by IS during Easter of 2015.

The de facto administration in Syria's northeast has built a new one a few hundred meters away. It's a modest building which, according to YPG militiamen at the village's main checkpoint, "will remain closed until the community is back." 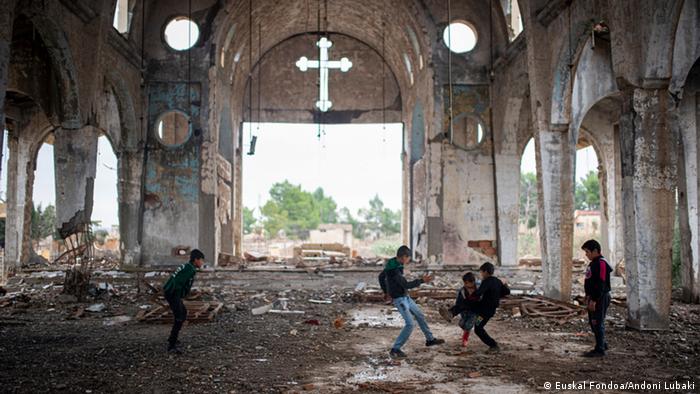 Christian villages like Tal Nasri have been abandoned by their original population, while others have taken refuge

The close presence of Turkish-backed militias in the village of Tal Tawil makes it too dangerous as a temporary refuge for the displaced. The only foreigners here a few YPG fighters and a dozen militiamen from the Syriac Military Council (MFS). According to the latter, a few civilians are holed up at the village school.

"Of course I'm afraid, but I'd rather die here than spend the winter in a tent," Isa Esheia, the caretaker of the empty school, told DW.

While many displaced families are seeking shelter in abandoned schools in Hassakeh, around 80 kilometers south of the Turkish border, the Kurdish autonomous administration has also set up a refugee camp on the outskirts of the city to cope with the emergency. The Kurdish Red Crescent staff manning the camp told DW that they're currently looking after more than 4,000 displaced people, "with at least one new family arriving every day." 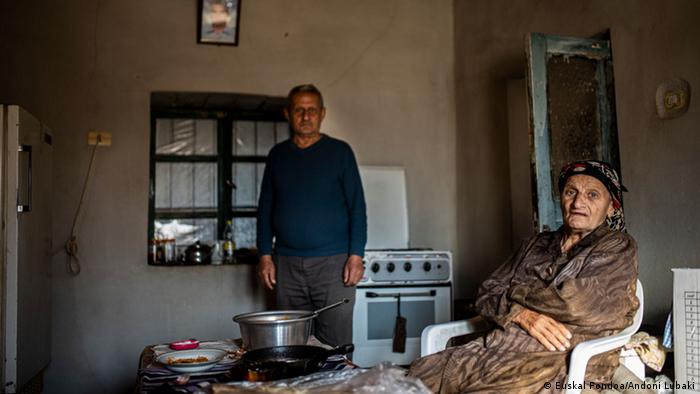 This elderly couple are unable to leave their village, which has become a ghost town

Too old to leave

The echoes of mortar shelling in the distance prevent the few civilians left in Tal Hafyan from venturing outside their houses. Hoshab and Hadare, a local elderly couple, are having a meal when we knock on their door. In her mid-70s, Hadare apologizes for her "broken Arabic." Her mother tongue is the modern Aramaic still spoken by this dwindling community.

"There is no war going on here, why are you asking such question?" said the woman. Hoshab apologizes. He said his wife suffers from dementia and is not aware of the situation.

Hoshab knows that the enemy is right in front of him. "I can even see them from here," he said, pointing to a window in their kitchen.

"We have no children [to help us], where could we possibly go by ourselves?"