The human rights watchdog spoke with dozens of refugees who were illegally removed from Turkey and sent back to Syria without a so-called "safe zone" in place. Turkey claims they went back willingly. 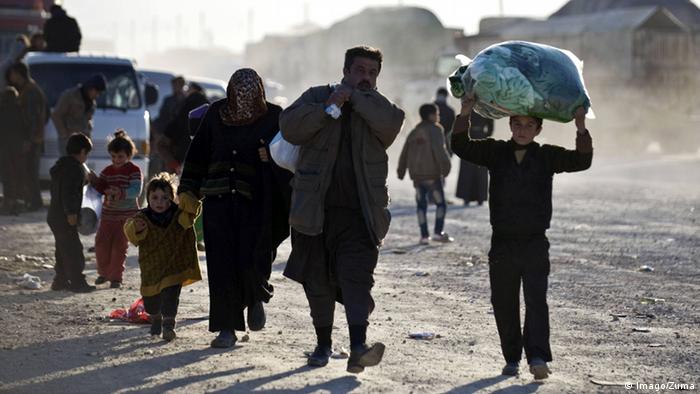 In the months leading up to its military operation in northeastern Syria, Turkey illegally forced Syrian refugees to return to the war zone, putting their lives in grave danger, Amnesty International reports.

"Turkey's claim that refugees from Syria are choosing to walk straight back into the conflict is dangerous and dishonest," said Anna Shea, researcher on Refugee and Migrant Rights at Amnesty International. "Rather, our research shows that people are being tricked or forced into returning."

Dozens of refugees told the organization that the Turkish police beat and threatened them into signing documents saying they were willingly returning to Syria. Based on interviews conducted between July and October this year, researchers estimate that hundreds of people have been sent back unlawfully and against their will.

Records from the Turkish authorities claim that 315,000 people have returned to Syria voluntarily. Turkey has taken in some 3.6 million Syrians in the past eight years, the report said.

It is currently illegal to deport people to Syria due to the risk of exposure to human rights violations.

While some were beaten or threatened with violence or prison, the police also deceived people to get them to sign "voluntary return" statements.

Refugees were told the documents they were signing were registrations, receipts, or even forms that said they wished to stay in Turkey. Others were told, falsely, that they were not properly registered in that province of Turkey and must therefore return to Syria.

Routine encounters with the police or migration officials, like renewing documents or showing identification on the street, could result in forced deportation to a war zone, the report says.

Kristian Brakel, the director of Germany's Heinrich Böll Foundation in Istanbul, told DW in September that there were credible reports from Syrians in Turkey who had registered for an asylum extension at police stations, only to be forced to sign a letter confirming their "voluntary departure" from the country.

Brakel added that the Turkish authorities threatened violence to make it clear that no appeals would be accepted.

"Of course, we can no longer talk about these departures as if they were voluntary," said Brakel.

Amnesty International was able to verify 20 cases of forced deportations. In all cases, the victims were sent over the border in a bus filled with dozens of people with their hands bound.

The majority of those deported seem to be men, though the organization also uncovered cases of teenagers and families with small children being sent back.

"It is chilling that Turkey's deal with Russia this week agrees to the 'safe and voluntary return' of refugees to a yet to-be-established 'safe zone.' Returns until now have been anything but safe and voluntary — and now millions more refugees from Syria are at risk," said Shea.

Turkey turns its back

If the expert assessments of Turkey forcing refugee deportations are confirmed, it would indicate a reversal of previous policy.

Fatma Sahin, the mayor of the Gaziantep, a Turkish city near the Syrian border, told DW in 2017 that for years local authorities had been trying to help Syrians in need.

"This is a tradition here, it is our culture. When your neighbor is suffering from hunger, then you should try to help," said Sahin, a member of Erdogan's ruling AK party.

"I think that what we've done has made us a model for the world. We have become an example of morality for the world," she said.

The latest Amnesty report seems to suggest that those humanitarian concerns have fallen by the wayside. But Turkey is not solely to blame, says Anna Shea.

"The European Union and the rest of the international community, instead of devoting their energies to keeping people seeking asylum from their territories, should dramatically increase resettlement commitments for Syrian refugees from Turkey," she urged.

Many Syrian refugees in Lebanon feel their situation is so dire that they are considering heading back to war-torn Syria. But it's a journey into the unknown, as Diana Hodali reports from Beirut. (29.04.2019)