MEPs universally condemned the Turkish military action in Syria but were divided on how to respond. Some called for further sanctions and the suspension of the customs union. 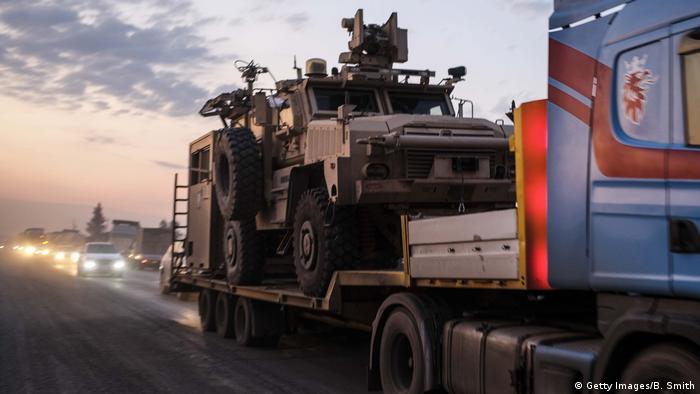 Members of the European Parliament on Wednesday called for further measures against Turkey for its military operation in Syria, but failed to agree on concrete actions to take.

European Commissioner for Humanitarian Aid and Crisis Management Christos Stylianides condemned the incursion, saying 200,000 people had been displaced and about 200 civilians had been killed. "We must use all of our power, all of our leverage to stop hostilities." He called on Turkey to allow humanitarian workers to continue their work and halt attacks on medical workers.

German MEP Özlem Demirel, herself of Kurdish background, criticized the EU's dithering response , saying "the incursion of the Turkish army should be condemned unequivocally. No country can simply march into another country."

"All world powers, including the EU, simply look to their own geopolitical and economic interests while international law was broken and war crimes were committed."

Other MEPs called for heavy sanctions on the Turkish government, forcing it to withdraw.

Germany's Michael Gahler from the European People's Party floated the idea of suspending the customs union with Turkey.

The Parliament had called for the suspension of accession talks with Turkey in March.

What is the latest news in Syria? Russia and Turkey  agreed on Tuesday to jointly administer the area of northeast Syria vacated by the Kurdish withdrawal. They extended the US-brokered ceasefire starting Wednesday, coinciding with the start of joint military patrols.

Why did Turkey launch an operation? Turkey has long wanted to establish what it calls a civilian safe zone that would act both as a place to resettle millions of Syrian refugees currently residing in Turkey, and as a buffer between it and its Kurdish forces, with whom it has a long-standing conflict. When US President Donald Trump announced the surprise withdrawal of US troops from the region, abandoning the allied Kurdish forces, it created the impetus for Erdogan to launch an incursion into Syria and try to forcibly establish a 444-kilometer-long and 32-kilometer-deep buffer zone along the border.

What is the US position? Trump's withdrawal fulfills an election promise to withdraw the troops from Syria, although they are reportedly instead being sent to Iraq instead, its other endless war. It has worked with Turkey to ensure a hasty retreat of Kurdish forces from the area. Trump called the withdrawal "good news."

What is Syria's position? Syrian President Bashar Assad, who has relied heavily on Russian support to reclaim Syria, described Erdogan as "a thief," saying he had "robbed the factories, wheat and oil, and today he is robbing the land."

An elderly Kurdish man was attacked in hospital; a man and his son were gunned down on the street — and no charges were filed. Human rights experts see a worsening situation due to Turkey's offensive in northern Syria. (22.10.2019)

Turkey has remained defiant in the face of international criticism, insisting the military will push forward with its incursion. The UN has warned of an impending humanitarian crisis as thousands flee to safety. (11.10.2019)

It is in the "security interests of Germany" to act in Syria, Annegret Kramp-Karrenbauer told DW. While she reportedly received Angela Merkel's signoff, her proposal caught other government politicians off guard. (22.10.2019)