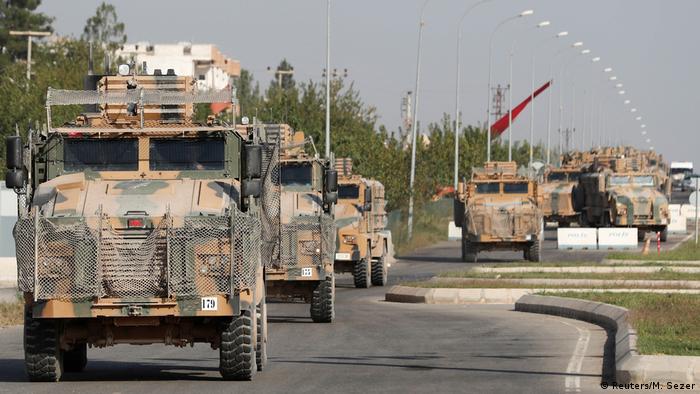 "The EU condemns Turkey's military action, which seriously undermines the stability and the security of the whole region, resulting in more civilians suffering and further displacement and severely hindering access to humanitarian assistance," the foreign ministers said in a joint statement released Monday. "The EU recalls the decision taken by some member states to immediately halt arms exports licensing to Turkey," they added, referring to "strong national positions."

EU member-state representatives will meet later in the week to "coordinate and review" their positions. The bloc also called for a ministerial meeting of the international coalition against the Islamic State (IS) group "to address how to pursue its efforts in the current context."

Turkey launched the incursion on Kurdish militias in northeastern Syria last week after President Donald Trump pulled out US troops stationed there. Critics say the move will disrupt the fragile stability the region, harming and displacing thousands of civilians and paving the way for IS to reestablish itself in the region. Last week, the EU called on Turkey to "cease the unilateral military action."

"This offensive is going to cause serious humanitarian devastation," French Foreign Minister Jean-Yves Le Drian said ahead of Monday's talks. "France expects a specific demand to end the offensive and a firm position on arms exports to Turkey."

The situation could force the NATO member's allies to get involved, according to Luxembourg's Foreign Minister Jean Asselborn. "Article five of the NATO pact states that all other countries must help to defend a country if it is attacked," Asselborn said, describing the situation as "extraordinary."

Germany and France, along with Sweden, Finland, and the Netherlands, have halted arms exports to Turkey. Turkey has said the move will have little effect.

Sweden sought an EU-wide embargo against Turkey in the talks and has also suggested taking measures against individuals.

"It is important that we stay in dialogue with Turkey," German Foreign Minister Heiko Maas said. "If this is not successful, we must be prepared to take further measures."

In a press conference on Sunday, French President Emmanuel Macron and German Chancellor Angela Merkel condemned the offensive. "We have a common desire that this offensive ends," Macron told journalists.

He also warned that the move created "unbearable humanitarian situations" that raised the likelihood of the reemergence of IS. The Kurds were instrumental in shaking the extremist group's hold on the region.

Merkel agreed, saying the offensive "should be stopped." Earlier on Sunday, in a phone call with Turkish President Recep Tayyip Erdogan, she called for "immediate termination" of the military action.