Syrian Kurdish forces and Turkey have accused each other of violating a truce. The Kurdish-led SDF is reportedly pulling away from sections of the border as part of a Turkey-Russia deal. 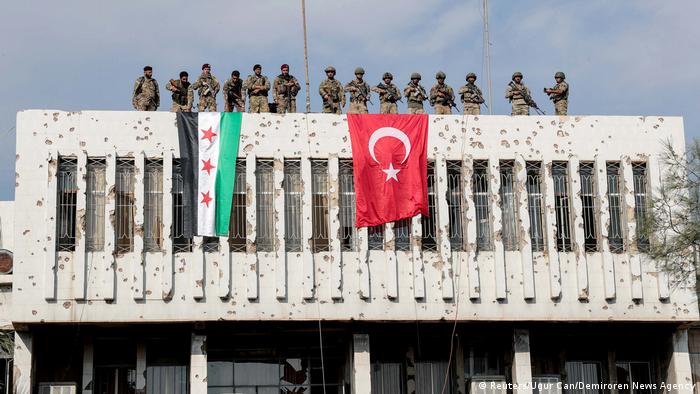 The Kurdish-led Syrian Democratic Forces (SDF) on Thursday accused Turkey and its rebel proxies of violating a ceasefire that halted a two-week offensive.

He called on Russia and the US to "rein in the Turks."

The Turkish Defense Ministry said five soldiers were wounded near the flashpoint border town after coming under attack by the Syrian Kurdish YPG militia, the main component of the SDF alliance. Ankara considers the YPG militia to be a terrorist group affiliated with Kurdish insurgents fighting in Turkey.

"The required response was given with the framework of self-defense," the ministry said.

Separately, Syria's state-run media said Turkish troops and its allied fighters clashed with the Syrian army outside the town of Tal Tamr, highlighting the complex battlefield situation and prospect of Ankara and Damascus entering direct conflict. The report said the Syrian army suffered "martyrs and wounded."

Russia said military forces have started patrolling the border as part of a deal reached with Turkey in the Black Sea city of Sochi on Tuesday.

Under the terms of the deal, the SDF is to withdraw from a 30-kilometer (19-mile) section of the border by next Tuesday and hand control over to the Russian and Syrian militaries.

If the agreement holds, next Tuesday Russian and Turkish forces will start to conduct joint patrols along a 10-kilometer strip of land in northeast Syria.

Kurds begin to pull back

The Syrian Observatory for Human Rights, a UK-based war monitor, said the SDF has started withdrawing from some parts of the buffer zone.

The Russian Foreign Ministry also confirmed the SDF had begun to withdraw.

Syrian Kurdish forces had already exited a 120-kilometer segment of the border strip between the towns of Ras al-Ain and Tal Abyad, where there is an Arab majority. That withdrawal was conducted under a previous US-brokered agreement with Turkey.

Kurds walk tightrope between Russia and US

Speaking to local administrative officials in Ankara, Turkish President Recep Tayyip Erdogan threatened to continue the offensive if the SDF did not withdraw from the entire border region.

US President Donald Trump's decision to pull troops away from the border paved the way for the long-threatened Turkish offensive against the SDF on October 9.

The US withdrawal has been widely criticized as an abandonment of the Syrian Kurds, who led the ground fight to destroy the physical caliphate of the "Islamic State."

Trump has suggested that several hundred US troops will stay in Syria to guard oil fields in the northeast corner of the country that the Assad regime seeks to take back.

Despite the chorus of criticism against Trump's decision to pull troops from the border in Washington and European capitals, SDF leader Abdi praised Trump's efforts on Wednesday, saying he "stopped the brutal Turkish attack."

In a move that is likely to enrage Turkey, Abdi is reportedly preparing to visit the White House and Congress after Republican and Democratic US senators urged the State Department to provide him a visa to discuss the situation in Syria.

"Major countries' leaders take chief terrorists along, sit with them at the same table, try to resolve this Syrian issue with them. How is this even possible?" Erdogan said Thursday, without naming any country.

Erdogan has said he may visit the US on November 13 at Trump's invitation.

An elderly Kurdish man was attacked in hospital; a man and his son were gunned down on the street — and no charges were filed. Human rights experts see a worsening situation due to Turkey's offensive in northern Syria. (22.10.2019)

Turkish President Recep Tayyip Erdogan and his Russian counterpart have agreed to extend the ceasefire in northern Syria by six days. The deal they made benefits Erdogan more than anyone else, DW's Erkan Arikan writes. (23.10.2019)

As Russian troops are deployed to northern Syria, Germany has reasserted the need for an internationally run safe zone in the area. NATO is set to discuss the proposal at a high-level summit Thursday. (24.10.2019)