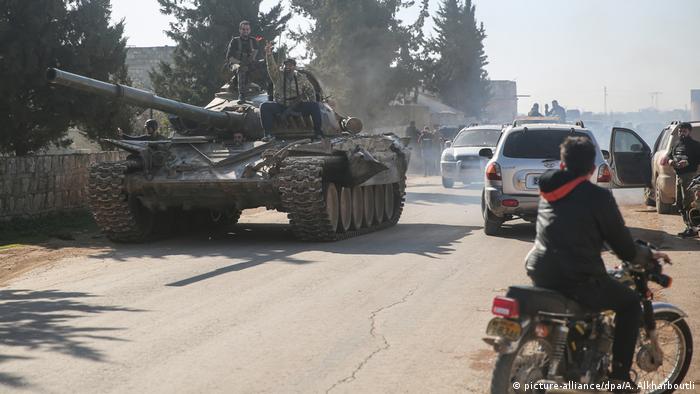 German Foreign Minister Heiko Maas said on Thursday that attacks on civilians in the north-western Syrian province of Idlib are "war crimes."

In an address to the United Nations Security Council in New York, Maas said the Damascus government and its ally Russia "have an obligation to protect civilians," but are instead "bombing civilian infrastructure, such as hospitals and schools."

The German minister called on the Council to ensure humanitarian organizations have full access to Syria, saying "cross-border aid remains of vital importance."

In January, the Council arranged the delivery of humanitarian aid through two border crossings on Turkish territory but stopped short at Syria's north-east because of opposition from Russia and China.

Secretary-General of the United Nations Antonio Guterres suggested in a report that the aid could be delivered via the Tal Abiyad crossing in Turkey instead of the risky Al Yarubiyah crossing in Iraq.

UN deputy emergency relief coordinator Ursula Mueller said that "if viable alternatives to Al Yarubiyah are not found for medical items, the gap between the humanitarian response and humanitarian needs will increase further." She added: "If medicine runs out and medical facilities are unable to carry out life-saving procedures, deaths will occur."

According to Mueller, the war-torn country could expect shortages in reproductive health-care by March.

Russian state television reported on Thursday that Turkish soldiers in Idlib were using shoulder-fired missiles to down Russian and Syrian military planes.

The report aired as Turkish and rebel officials said Syrian rebels, supported by the Turkish military, had seized the Idlib town of Nairab.

Turkey-backed Syrian opposition fighters reclaimed a strategic northwestern town from Damascus forces on Thursday, opposition activists said, according to The Associated Press. The move cut off an important highway only days after the government reopened it for the first time since 2012.

The Russian defense ministry on Thursday accused Turkey of violating an Idlib peace agreement by supporting rebels with artillery fire and drones.

"In violation of the Sochi agreements in the Idlib de-escalation zone the Turkish side is continuing to support illegal armed groups with artillery fire and the use" of drones to target the Syrian troops, the ministry said, quoting Oleg Zhuravlev, the head of the Russian Reconciliation Center for Syria.

According to the UN, some 950,000 civilians have been displaced in north-western Syria since December due to an ongoing Syrian government offensive in Iblib.

The EU and the UN has called for an end to the Russian-backed Syrian government military offensive in the rebel-held city of Idlib. Almost one million people have been displaced in "horrendous conditions" in the area. (21.02.2020)

Turkish-backed militants have clashed with Syrian government forces in Idlib as they tried to push into the area. Responding Russian airstrikes killed at least two soldiers. (20.02.2020)