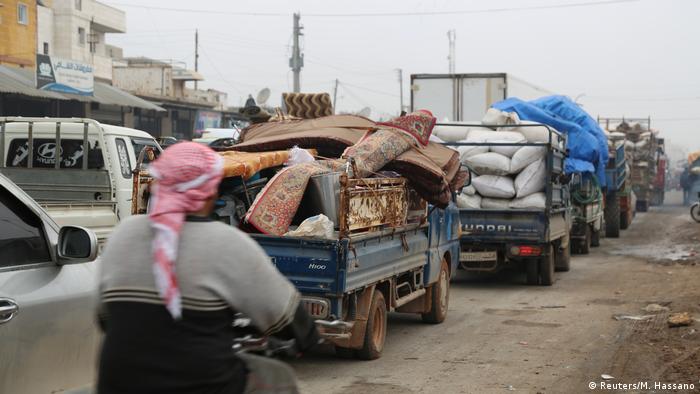 For weeks, Syria's Idlib province — the country's last remaining stronghold of mostly jihadi rebels — has been under attack from Syrian government forces and Russia. Artillery fire, rockets and aerial bombardments have laid waste to many towns. In light of the ongoing offensive, the Syrian American Medical Society (SAMS), a medical relief organization, has shut down operations at two large hospitals in the region.

Medico International, a relief and human rights organization, has reported that over the past weeks, some 100 hospitals have been deliberately bombed. Given this relentless campaign, hundreds of thousands of civilians are fleeing their homes. According to Syria's Response Coordination Group relief agency, some 217,000 people have fled since November.

Turkey's President Recep Tayyip Erdogan has warned that a new mass refugee exodus from Syria — similar to the one in 2015, when vast numbers of asylum-seekers streamed into Europe — may be imminent. He said the bombing campaign on Idlib province had already driven 80,000 civilians from the region, who were now heading for Turkey. The president said his country could not "shoulder this burden all by itself," adding that "all European countries, and Greece especially, will come to feel the negative consequences" of this exodus.

German Chancellor Angela Merkel has apparently heeded Erdogan's warning and reportedly plans to visit the Turkish capital, Ankara, in January. So far, the German government has not officially confirmed the planned meeting with Turkey's president. It can be expected that, if the meeting does go ahead, Merkel will lobby Erdogan to keep alive the EU-Turkey refugee agreement, which was struck in 2016.

EU-Turkey deal to be renegotiated?

The agreement obliges Turkey to stop asylum-seekers from departing from its territory for nearby Greek islands with the help of people smugglers. In return, up until last year the EU provided €6 billion ($6.7 billion) to improve the living conditions of Turkey-based refugees. The deal also envisions that migrants who are not entitled to asylum in Europe will be deported from Greek islands back to Turkish soil. The EU has promised to take in one Turkey-based Syrian refugee for every refugee deported from Greece. The EU has also pledged to begin talks about scrapping visa requirements for Turkish citizens visiting the bloc and about Turkey's prospective EU membership.

Turkey, meanwhile, wants to renegotiate the existing deal in light of the rising refugee numbers. And earlier this summer, Erdogan threatened he would allow asylum-seekers to travel onward to Europe unless the EU increased its financial support of refugees staying in Turkey. To date, Turkey has taken in 3,6 million Syrian refugees.

When Horst Seehofer, Germany's interior minister, traveled to Turkey in October, Ankara presented him with a whole host of fresh demands. Turkey's leadership said it wants greater financial commitment to support the growing number of refugees, easier access to entry visas for Turkish citizens, greater progress in establishing a customs union and help in creating a security buffer in Syria. 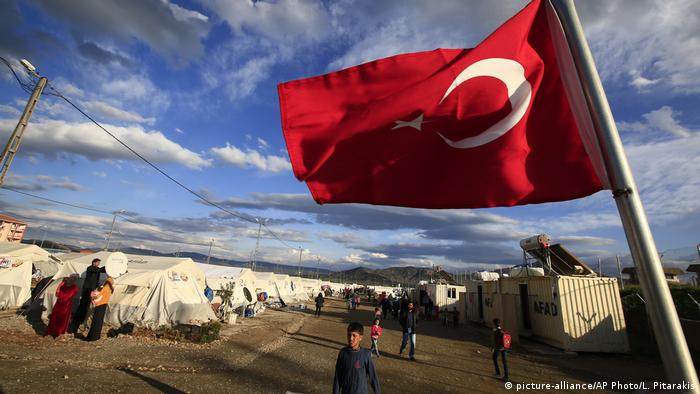 Turkey currently hosts more than 3.6 million Syrian refugees in camps like this one in Islahiye in Gaziantep province

Sociologist and migration expert Gerald Knaus, who is considered to be the architect of the EU-Turkey refugee deal, says so far the agreement has served its purpose. Speaking to online platform web.de, he said that since the agreement came into effect, only very few Syrians have made their way from Turkey to the EU.

He said that of the 50,000 migrants who made it to a Greek island in 2019, less than a third were from Syria. Knaus said that the overwhelming majority of Syrians who have fled to Turkey had barely any incentive to travel to Europe anyway. He explains that "as long as Syrians enjoy limited but indefinite protection in Turkey and have access to its health care and education system," things will stay as they are. Moreover, he adds, "1.7 million Syrian refugees in Turkey receive EU-funded welfare." But, he says, the EU must ensure funding does not dry up.

Greece to bear the brunt

Without this EU funding, refugees in Turkey would find themselves in an increasingly precarious condition, says Knaus. As neither the EU nor Turkey wants this to happen, they are keen to cooperate, he says. Knaus explains that the current deal affords the EU a certain leeway and that this freedom would disappear if the current agreement is dropped, while the bloc would still be dependent on whatever decisions Turkey chooses to make.

Greece, meanwhile, is expecting a further 100,000 asylum-seekers to arrive on its islands in the coming year. Manos Logothetis, the government commissioner for migration, recently told Germany's Funke Media Group that in the past 6 months alone, Greece had received 45,000 new asylum-seekers. 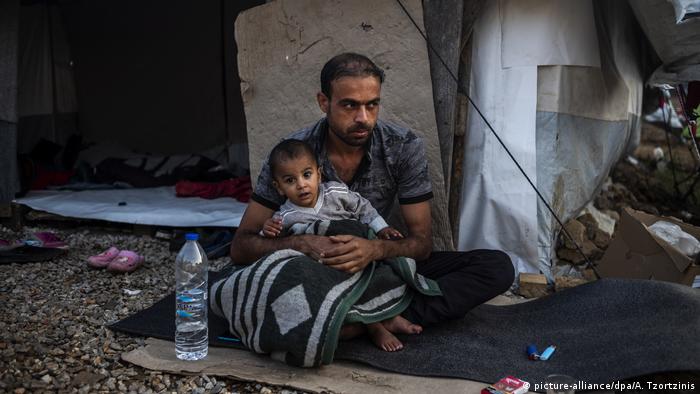 Conditions for refugees on the Greek islands, as here on Lesbos, can be dire

This means that the EU must now swiftly process their asylum applications. Knaus says while the overall number of asylum-seekers has dropped drastically since 2016, the bloc "has not succeeded in processing applications faster and sending back Syrians, Pakistanis and Afghans who do not qualify for EU protection." He says that in 2019, an average of just 14 rejected asylum-seekers per month had been sent back home, which puts tremendous strain on Greece's asylum system, to the point of imminent collapse.

Knaus also says upcoming talks about the EU-Turkey refugee deal will not only potentially impact the lives of many Syrian refugees, but that "if the agreement fails due to the EU's shortcomings and if the bloc violates its own values, then there will be no one left to credibly stand up for the global refugee convention."