German Interior Minister Horst Seehofer has called on the EU to do more to support Turkey and avoid another refugee crisis. If nothing is done, he said, the crisis may become "even greater than four years ago." 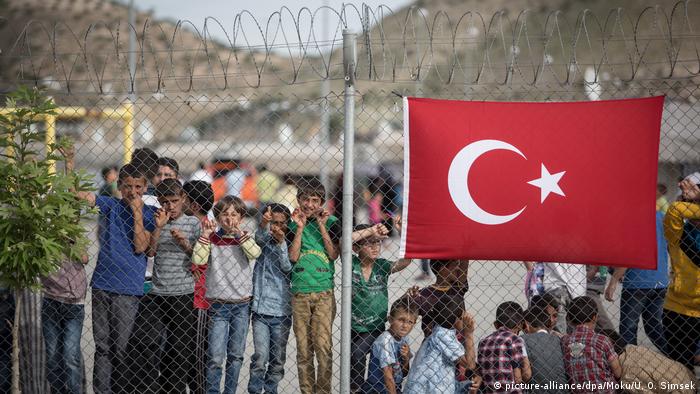 German Interior Minister Horst Seehofer has warned of a larger influx of refugees than that seen in Europe in 2015. He made the statement during an official visit to Greece.

Traveling with incoming European Commission President Ursula von der Leyen, Seehofer also said the EU had to do more to support Turkey so that refugees did not attempt the often dangerous crossing to Greece.

"We have to help our European partners even more in patrolling the EU's external borders; we have left them alone for too long," Seehofer told the Bild am Sonntag newspaper, referring not only to Greece but also to Spain and Italy. "If we don't, we will once again see a refugee wave like in 2015 — maybe even greater than four years ago."

Seehofer said Europe had to avoid a crisis for which it was unprepared, as it had been in 2015. He clarified that he had "the full support" of Chancellor Angela Merkel, with whom he has publicly differed on refugee policy in the past.

In a separate interview with the Welt am Sonntag newspaper, Seehofer also said the EU had to do more to assist Turkey in dealing with the millions of refugees that have entered the country since the start of the Syrian war in 2011.

"Turkey is doing a great deal in welcoming refugees," Seehofer said. "It is also in our interests, but it is clear that we cannot manage the future with the resources of the past."

In 2016, the EU agreed to give Turkey €6 billion ($6.59 billion) in aid for projects devoted to Syrian refugees. However, since then, Ankara has been accused of not sticking to its side of the deal to take back asylum-seekers.

During a two-day trip this week, Seehofer traveled to both Turkey and Greece, where he held talks with government representatives, hoping to broker a strong deal on refugees and border controls.

Seehofer had said earlier that Germany would take in a quarter of all asylum-seekers rescued while attempting the dangerous journey across the Mediterranean Sea to reach the EU.

The statement attracted sharp criticism from some of Germany's Christian Democrats and the Free Democrats (FDP), who said that the proposal could draw even more migrants to Europe.

But EU Migration Commissioner Dimitris Avramopoulos rejected the criticism. "I disagree," Avramopoulos told the Funke newspaper group. Seehofer's proposal should not be seen in isolation from all other asylum-related efforts in the EU, said the commissioner.

"Our primary goal is to reduce irregular arrivals, fight smugglers and facilitate the repatriation of irregular migrants — and save lives as well as open legal channels for those in need of protection," he said.

Avramopoulos says he's confident that a solution can be found during the meeting of the EU interior ministers on Tuesday. "I sense there is momentum. More and more member states recognize that there must be predictable, temporary arrangements for the accommodation of asylum-seekers after their disembarkation."

Germany, France, Italy and Malta have reached a deal on redistributing migrants rescued at sea, ministers say. Disagreement on the issue among EU states has led to migrants sometimes spending weeks stranded at sea. (23.09.2019)