Tourists are avoiding the Greek island of Samos due to the shocking situation at the Vathy migrant camp, which has grown into a sprawling settlement. Locals and asylum-seekers feel authorities have abandoned them. 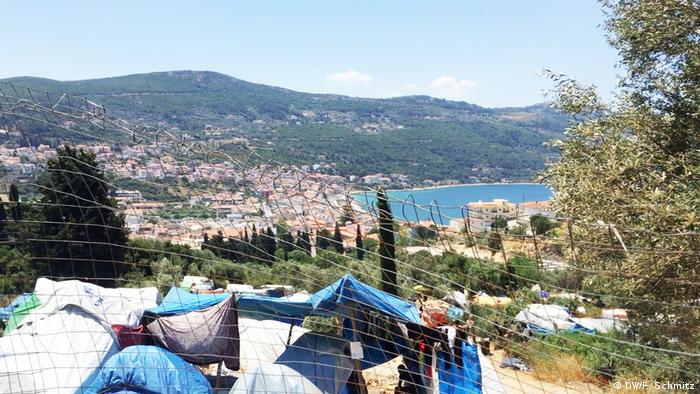 "That camp is our shame," says a teacher on Samos, pointing to a refugee center near the town of Vathy. The camp, set up in 2016 following the European Union's controversial refugee deal with Turkey, is home to migrants waiting for their asylum applications to be processed.

The Greek island of Samos is just a stone's throw from the Turkish coast. And boats with migrants arrive here constantly — though again and again, refugees drown in the crossing in a desperate attempt to reach the EU.

It's no wonder Greek locals are appalled by the camp: originally intended for just 650 asylum-seekers, it's now home to about 4,000 migrants from the Middle East and Africa. Officially, nobody is supposed to wait longer than three months to have his or her asylum application processed. But the reality is very different, leaving many migrants stranded. 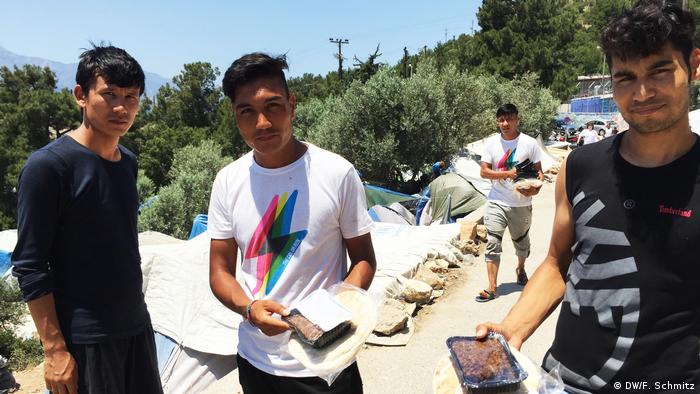 Daily rations include just 1.5 liters of drinking water and a small amount of food

Some 1,500 migrants have settled around the camp, in what has become known as "the jungle."

"We have to deal with rats and snakes, we don't have toilets, showers or access to drinking water," says a 30-year-old woman from Congo who lives near the camp. She says many Greek people accuse people like her of coming to Europe just for the money. But that's not the case, she says, stressing that her country is embroiled in conflict.

She will only be able to make her case to Greek authorities in March 2021. She's desperate, and can't fathom giving birth to her child in this makeshift camp, where migrants receive just 1.5 liters of drinking water (less than half a gallon) and a small amount of food each day.

Migrants in the official camp, meanwhile, report similarly dire conditions. Women have reported being raped, and endless queues are common. "You have to wait in line for three hours to get food, and at least an hour just to use the toilets," says a 24-year-old Iraqi man. His first asylum application was rejected — he says all Iraqis have had their applications rejected, though he has no idea why. For him, returning home is out of the question: "If I go back to Iraq, I will get killed."

A 32-year-old man from Congo finds himself in a similar situation. He and his wife have been living in the island camp since last October, and they are desperate to get to Belgium.

"Belgian authorities have to grant us asylum; they colonized our country. Making it to Belgium will be like reaching home," he says. The couple left their children behind so that they can first sort out their asylum status — though that's proving difficult. So far, they're still waiting for an appointment to see the Greek authorities about their application.

He says they currently receive €90 (about $100) in assistance every month, of which they have to spend €2.50 euro on bank fees. "How are we supposed to live off that?" he asks, incredulously.

'There are just too many migrants'

The refugee camp has almost doubled the population in Vathy, and visibly changed the idyllic city. Today, migrants from the Middle East and Africa are more common than Western tourists.

Not all locals are comfortable with this development. One says that at first, there were hopes the refugee center would also bring additional European funds to the area. But that never materialized. And today, the Greek islanders and asylum-seekers feel they've been abandoned.

Many shops, cafés and restaurants in Vathy are off-limits to asylum-seekers. Owners fear that otherwise they'll scare away the tourists. A clerk working a shop that does welcome migrants confesses: "I won't let my kids out on the streets by themselves, I'm scared for their safety." And her colleague insists: "We're not racists; there are just too many migrants."

Maria, who runs a jewelry shop on Vathy's high street, think these fears are irrational. She admits there have been some problems but says that locals' worries stem "from their fear of the unknown." Maria says many locals are wondering how long the asylum-seekers will stay on the island, and if they'll start outnumbering them.

Many people on Samos fear the migrant presence is hurting the tourist trade. Evangelos Kalogeris, who in 2017 opened a falafel restaurant on Vathy's main square, is certain the current situation is putting tourists off.

Kalogeris, who employs asylum-seekers in his eatery, says the migrant situation "has unjustifiably harmed the island's reputation; the migrants are not causing any problems."

Media reports have played their part, creating the false impression that Samos is overrun by migrants. The island is actually rather large, and the majority of asylum-seekers are based in and around Vathy. A travel agent in the picturesque village of Kokkari, located just 2 kilometers (just over a mile) from Vathy, says "you don't see any refugee here or in the south of the island." And her colleague, who works nearby in an office at Vathy's port, say cruise ships now avoid Vathy to spare tourists the sight of all the migrants.

That's why Kalogeris is urging politicians to rethink the migrant plan. He believes asylum-seekers should be fairly redistributed, saying "our island can support 1,000 people at most." While some migrants have language skills that allow them to work in the tourist industry — as in Kalogeris' falafel shop — not all 4,000 asylum-seekers can expect to find such a job.

Since the closure of the Balkan route, many refugees who arrived on the shores of Greece are trapped in overcrowded camps without any prospects. A report from Fabian Pianka, who visited the Greek hotspot in Samos. (10.08.2017)

Every year, the bodies of migrants who die trying to cross the Mediterranean wash ashore in Tunisia. DW met the man who holds funerals for the deceased, giving them the respect often lacking during their lifetime. (18.12.2017)