Tunisia′s gravedigger of drowned migrants | World| Breaking news and perspectives from around the globe | DW | 18.12.2017

Every year, the bodies of migrants who die trying to cross the Mediterranean wash ashore in Tunisia. DW met the man who holds funerals for the deceased, giving them the respect often lacking during their lifetime. Chemseddine Marzoug quickly packs two bottles of water before he turns off the main road to head south on a bumpy dirt road that runs a hundred meters through an olive grove and an abandoned piece of land. At the edge of the former garbage dump, there is a sign that reads "Cemetery for Unknown" in half a dozen languages.

Marzoug has buried over 350 corpses in the past 10 years; 74 this year alone. He fears that there will be many more. "In the winter, when the east wind blows, a particularly large number of corpses are washed up on the shores of the Gulf of Zarzis."

The small town of Zarzis on the southern Tunisian coast is about 50 kilometers (some 30 miles) away from the Tunisian border with Libya, where refugee boats headed for Europe regularly depart. 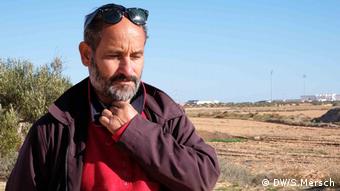 Marzoug comes to the graveyard two to three times a week

And regularly, the ships of death, as Marzoug calls them, encounter distress at sea, sink or capsize. If the passengers are lucky, they are rescued by NGO boats or the navy of one of the neighboring countries. "If not, they come to me."

Story behind every grave

The 52-year-old with graying hair trudges along the anonymous graves. He often stops and bends over to water the flowers he has planted on the mounds of soil. He has also buried two children here; Lego blocks and toy cars lie on their graves.

There is a story behind every grave, even though the volunteer of the Tunisian Red Crescent does not know the names or origins of the deceased.

There is only one gravestone on one mound instead of a metal plate with a number on it. "This here is Rose-Marie, a 28-year-old teacher from Nigeria," he explains.

She died during the crossing in the spring; the 126 survivors on her boat were rescued by the Tunisian coast guard. "Her partner lives near here in the refugee center. He was here the day before yesterday and brought flowers," says Marzoug.

Marzoug used to work as a fisherman. Since the late 1990s, he and other fisherman have been finding corpses or body parts in their fishing nets. At that time, Marzoug started coordinating the funerals with the authorities and burying the dead in the cemetery of the small town. But as time passed, the number of corpses grew.

"The people complained that the cemetery was too full and that there is no more space for residents since we have been burying foreigners there," he says. The local authorities then granted the Red Crescent a piece of abandoned land on the edge of the city where locals dumped their garbage. Ever since then, Marzoug has been burying the nameless dead there.

"These people have suffered repression in their countries of origin and in Libya, sometimes dying in the desert or taking the ships of death," says Marzoug. He is convinced that at least in death, they should be given a little respect and dignity.

His task is not always easy, says Marzoug. He often buries only body parts or very decayed corpses that have been in the water for a long time. But he has found his calling, as he maintains that in death, everyone is equal, regardless of origin or religion.

"If we do not preserve what little human humanity is left, we will soon have a third world war ahead of us," he says. 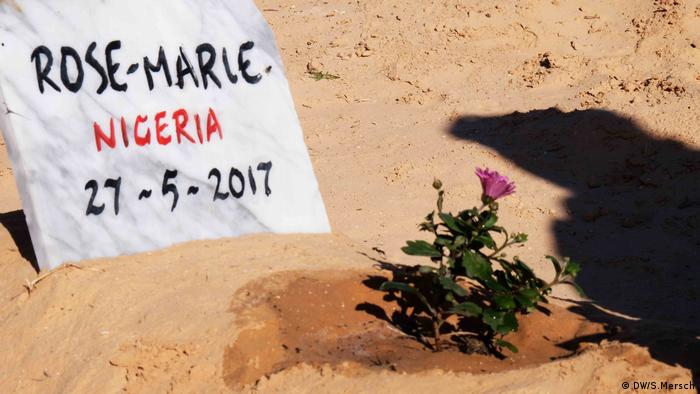 'Some people told me I was crazy'

Marzoug comes to the graveyard two to three times a week to make sure everything is all right. "Some people told me I was crazy," he says, shrugging his shoulders as he walks from grave to grave. He keeps rubbing his back, as the large number of corpses this year has taken its toll on his health.

Marzoug clearly blames Europe and its border policy for the deaths, as Europe does not invest in Africa or offer visa facilitation, thus forcing people to get on the boats. Two of Marzoug's sons also traveled across the sea to Europe.

Fundraising for the cemetery

"Maybe the dead spared them death," he says, although he has always been against the sea journey. "They were patient in the seven years since the revolution, without work or prospects." Today, he understands their decision a bit, as he sees young people in Tunisia as practically dead. "This way, they die with dignity at sea — or make it to Europe where there is at least democracy."

Another grave has been dug. It will be the last one on this site, and then there will be no space left. Since there is no government support, the Red Crescent is gathering donations to buy a new cemetery and a hearse so that the dead are no longer transported in a pickup truck.

If no one helps them, then "in the future, we will gather wood, burn the corpses, fill containers with ashes and throw them back into the sea," says Marzoug. He adds that this is the only other option if no one respects the dead on land, because the dying in the Mediterranean is far from over.

DW spoke with John Dalhuisen, Amnesty's director for Europe and Central Asia, about the allegations that the EU has been complicit in the abuse of migrants in Libya. (12.12.2017)

Germany will allocate €120 million to improving the conditions of refugees and migrants stranded in Libya and made vulnerable to enslavement and official violence. The government in Tripoli would administer the funds. (05.12.2017)

A Bundeswehr vessel has rescued 102 migrants off the coast of Libya. In a dramatic few days of rescue missions, a further 50 migrants were airlifted after being stranded in the Aegean Sea between Turkey and Greece. (14.12.2017)