More than 15,000 refugees are trapped on Greek islands. Complicated procedures make their situation even harder. Marianna Karakoulaki and Dimitris Tosidis have talked to some of them in Samos. 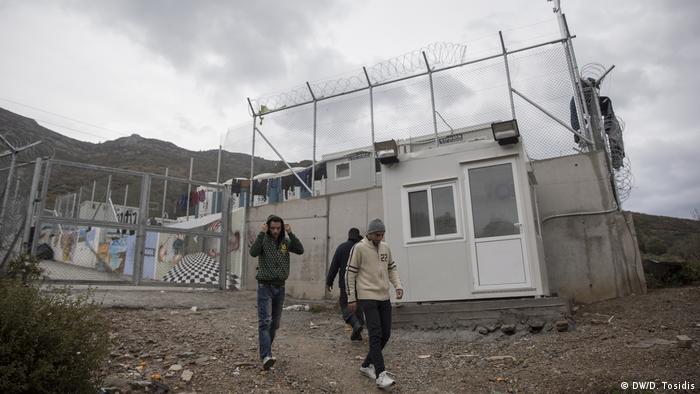 The refugee camp on the island of Samos

When Mohammed from Iraq arrived at the refugee camp on the Greek island of Samos with his family, they had nowhere to stay. "We were given two small tents by an Iraqi refugee," he told DW. A few days later, he moved to a container. "One of the families who were living in this container left the camp. This is when I decided to buy it," he continues, adding that it is common for people who leave the camp to sell their containers to others. Everyone is aware of this unusual - and unjust - trade, but nobody seems to do anything to prevent it. At the moment, he has moved from the refugee camp to one of the private facilities funded by the UNHCR.

The refugee camp on the island of Samos was built for 850 people, but it hosts more than 1,800 at the moment. More than 600 people are living in 56 sometimes unheated containers, while others are sleeping in tents - or wherever they find a free spot to lie down. Ralf Kist, the Frontex team leader of the German mission, told DW "the conditions at the camp are improving," but current and former residents of the camp complain about a life of misery among mud, dirt and rubbish.

Maher and Ahmad, who met at the camp and became inseparable, have eventually moved to one of the private facilities in Samos operated by Praksis, a Greek NGO. Maher suffers from epilepsy and had a severe attack one day before the DW reporters visited him. Luckily, Ahmad, a 27-year-old student from the Palestinian refugee camp of Yarmouk in Damascus, takes care of him. The only time they were not together was when Maher had to be transferred to Athens for immediate medical treatment. In the Greek capital, he accidentally ended up in the middle of a demonstration. That was when he was seriously injured by a Molotov bomb. He tried to protect himself by putting his right hand in front of his face. It caught fire and he suffered serious burns. 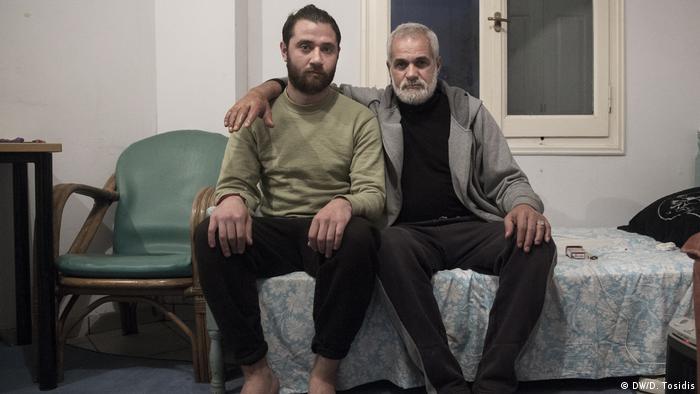 Maher fled from the Syrian city of Homs because of the war. Three of his sons are in the Netherlands. The rest of his family, including his wife and a ten-year-old son, are still in Syria. He hoped he would be the link to reconnect his family. But his dream could be shattered: When he embarked on the perilous journey, he was not aware of the EU-Turkey refugee deal.

"My family fled Palestine in 1948, I was born in Syria, but I had to flee the country. It feels like continuing my family's story," he told DW. "I fear I will never see my family again," he continues in a trembling voice.

'Some try to claim a different nationality'

Vathy, the capital of Samos, is full of contradictions. One of the island's most central hotels is crowded: refugees, aid workers, officials, volunteers, journalists. Despite the rain, many refugees gather in front of the port: Angling is an activity that changes their never-ending daily routine. The island of Samos, located in the Northern Aegean Sea, only 1.7 kilometers from Turkey, is currently hosting about 2600 refugees and asylum seekers. At the moment, there are not many arrivals. Once a boat is rescued, refugees are taken to the "hotspot" camp of Samos. This is where the complicated European and domestic bureaucratic procedures start. 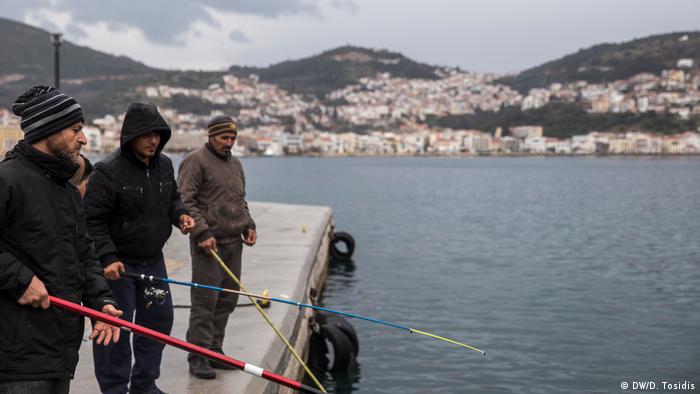 Refugees angling in front of the port

"There are asylum seekers who try to claim a different nationality because, from their perspective, they might be sent back," Ralf Kist, the Frontex team leader of the German mission, told DW. "But our job is to screen the situation. Additionally, we have to identify the 'facilitators'," he added - meaning people smugglers. Frontex officers investigate the new arrivals' asylum claims. Afterwards, the Greek authorities start their own procedures with the Greek Asylum Service processing the asylum claims. This whole process can last for several months. An aid worker claims that some people have been waiting since April 2016.

Healthcare on the verge

Although the EU-Turkey refugee deal prevents people from leaving the Greek islands, including Samos, those in need of immediate medical treatment can be transferred to hospitals in Athens. "Everyone claims that they suffer from a serious medical condition in order to get a health certificate that will deem them vulnerable," hospital manager Nikos Kaklamanis told DW. "This means that there is a proportionately larger number of patients than the hospital can examine, which can have serious consequences. Because of this chaos, there may be incidents and cases that will not receive proper attention," he added. 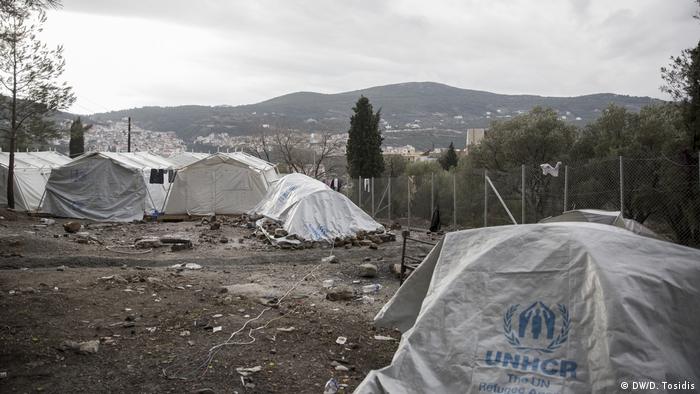 Many of the refugees are sleeping in tents

Anxiety is also very common among refugees who live on the island, said Jayne Grimes, a psychologist working for Doctors without Borders (MSF) outside the refugee camp. In the past week, there was one confirmed suicide attempt among the refugees. According to Grimes, many of them suffer from depression.

However, the refugees DW talked to in Samos don't blame Greece for their ordeal. Ahmad is aware that Greece is facing difficult times - and would like to give something back to this country: "If we could at least work!" He had been studying economics before leaving Syria. In his opinion, the hardest part is not being allowed to work and continue his education.

Mohammed describes his own situation as even harder, since he is not from Syria and his chances of being granted asylum are lower than Ahmad's: "A few months ago, we were refugees, now we are not. Every country looks at its own interests. But when you have your roots somewhere, why would you ever cut them? War makes you flee," he concludes.