A second group of migrants has been sent from Lesbos to Turkey as part of a deal with the EU. Human rights activists have said a rush to implement a refugee deal has led to dire conditions for migrants in Greece. 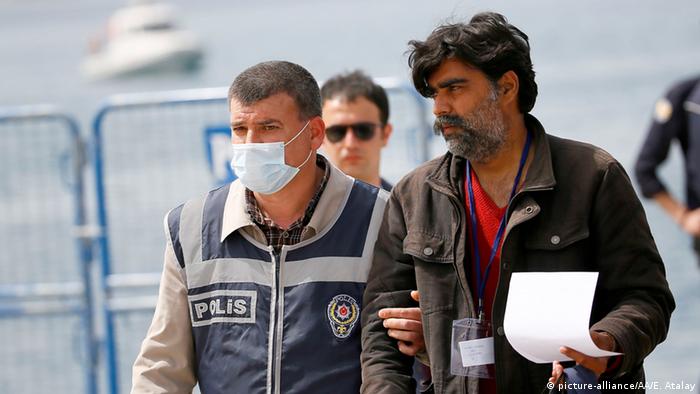 Two separate boats carried about 220 migrants from the Aegean island of Lesbos to the Turkish port of Dikili on Friday.

The migrants are the second group of people to be sent back to Turkey under an agreement with the EU. On Monday, 202 people were taken from Greece to Turkey.

Most of the migrants were from Pakistan and Bangladesh, Greek authorities said.

The migrants were taken to a reception center in Kirklareli near the border with Bulgaria, where their cases will be evaluated ahead of likely deportation to their home countries.

Three activists were arrested after clinging onto the ferry's anchor to prevent it from leaving. Another 30 people gathered at the port of Lesbos, chanting "Stop deportations," "EU shame on you" and "freedom for the refugees."

The European Union's agreement with Turkey calls for people who arrived in Greece after March 20 and who do not request or meet the conditions to receive asylum to be sent to Turkey. For each Syrian sent back to Turkey, the EU is obligated to take another Syrian who made a request for asylum in Turkey - a number capped at 72,000.

After the first group of migrants was returned, a spike in asylum applications slowed the process, as Greece, like all nations, is required to evaluate all applications for refuge. Some migrants are suspected of not having initially requested asylum in Greece in hopes of being allowed to travel to other EU nations.

The EU requires the first bloc member a person enters to evaluate asylum requests, though the current influx of refugees has led some governments to disregard the rule and allow migrants to transit through to central and northern Europe.

Turkish President Recep Tayyip Erdogan warned on Thursday that Ankara would not keep up its end of the deal with the EU if the bloc did not meet the conditions set out in the agreement by June. Specifically, he said the pact entitled Turkey to a total of 6 billion euros ($6.82 billion), a restart of EU membership talks and visa-free travel for Turkish citizens in the Schengen zone.

'Fear and desperation are palpable'

"On the edge of Europe, refugees are trapped with no light at the end of the tunnel. A setup that is so flawed, rushed and ill-prepared is ripe for mistakes, trampling the rights and well-being of some of the most vulnerable people,” Gauri van Gulik, AI's deputy director for Europe, said in a statement.

She added that the 4,200 people held in closed centers on the two Greek islands were uncertain about their futures after fleeing from their homes.

"People detained on Lesbos and Chios have virtually no access to legal aid, limited access to services and support, and hardly any information about their current status or possible fate," van Gulik said. "The fear and desperation are palpable."

Some 150 migrants broke out of a camp on the island of Samos on Thursday but were later persuaded to return, the government source said. Migrants on Greek islands have also begun a hunger strike to prevent their expulsion and called for borders to Balkan nations to be reopened.

The European Commission has launched a drive to reform its asylum rules in order to distribute refugees more evenly around the bloc. Officials have also said the refugee deportation deal with Turkey is "a good start." (06.04.2016)

The leader of the world's catholics is expected to visit migrants at the Greek island of Lesbos. The trip comes shortly after Greece began sending back asylum seekers to Turkey under a new agreement. (05.04.2016)

Life in a refugee camp