Migrants threw rocks and other objects at police officers, resulting in one injury. Greece said it blocked nearly 10,000 migrants from entering the European Union on Sunday. 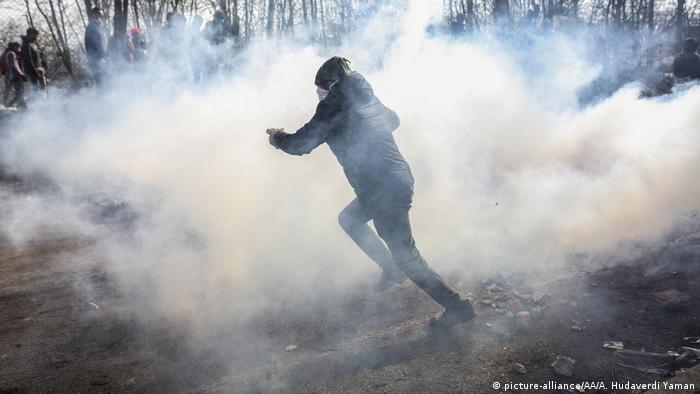 Greek army and police patrols used tear gas and stun grenades to stop attempts by thousands of refugees to enter the country on Sunday.

While the situation appeared calm on Sunday morning, the afternoon saw more unrest when authorities used tear gas and water cannon to push back crowds. Migrants threw rocks and other objects at police officers, resulting in one injury.

The United Nation's migration organization reported that at least 13,000 people had gathered on Turkey's 212-kilometer (125-mile) border with Greece by Saturday night, the majority of whom appeared to be from Afghanistan.

Greece said Sunday it had blocked nearly 10,000 migrants from entering. Police and soldiers blocked 9,972 "illegal entrances" from reaching the northeastern Evros region over the past 24 hours, according to a Greek government source.

Locals on the offensive

Meanwhile, in Lesbos, local residents refused to allow migrants to disembark from a dinghy that had just arrived.

The locals, who were shouting "Go back to Turkey," stopped around 50 migrants, including children, from landing their boat after several hours at sea.

They also shouted insults at a local UN refugee agency (UNHCR) official while another group of locals used chains and rocks to block the route of a police bus transporting newly-arrived migrants to a refugee camp, according to Greek news agency ANA.

The residents also set fire to a disused migrant center on the island of Lesbos, according to an Agence France-Presse news agency photographer. Around 150 people reportedly gathered at the center, which was run by UNHCR.

Read more: Turkey will not stop refugees 'who want to go to Europe'

Despite the panic in Greece, however, Bulgaria continued to say that no migrants had illegally crossed the southern border into Bulgaria.

"At this point, the situation is calm," said Bulgarian Defense Minister Krasimir Karakachanov in an interview with the country's state broadcaster on Sunday.

Karakachanov said that up to 1,100 soldiers could now be sent to the Turkish border if necessary, adding that Bulgaria's border was well protected by wire fences and thermal cameras.

He also confirmed that Bulgarian Prime Minister Boyko Borissov was scheduled to meet Turkish President Recep Tayyip Erdogan on Monday to discuss Syria and the wave of migration coming from Turkey.