Over 13,000 migrants gather on Turkey-Greece border 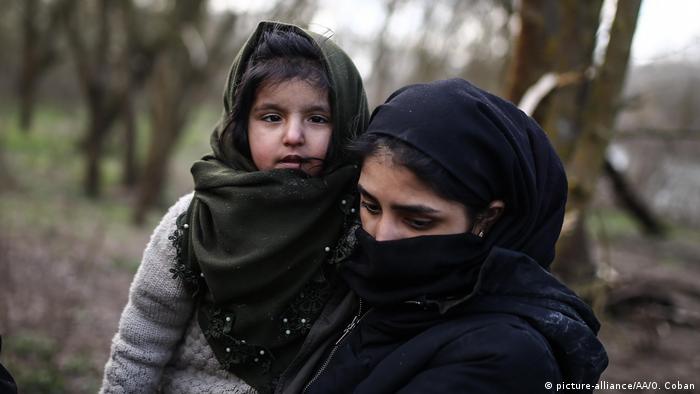 About 13,000 migrants have gathered along the 212-kilometer (125-mile) border between Turkey and Greece after Turkish President Recep Tayyip Erdogan threatened to allow refugees to cross into Europe, the United Nations said on Saturday.

"Thousands of migrants, including families with young children, are passing a cold night along the border between Turkey and Greece," the International Organization for Migration (IOM) said in a statement.

"The number of migrants moving through Edirne towards the border grew through the day as cars, taxis and buses arrived from Istanbul," IOM Turkey Chief of Mission Lado Gvilava said.

Some migrants managed to cross into Greece on Saturday night and Sunday morning. "220 refugees arrived on the coast of Lesbos and were brought into a camp," DW's Greece correspondent Florian Schmitz reported. Reuters news agency reported that more than 500 may have made it to Greece from Turkey within 24 hours.

The European Union said it was ready to provide "additional support" to Greece and Bulgaria amid a flood of migrants coming through Turkey to reach Europe, and is watching the situation "with concern."

"Our top priority at this stage is to ensure that Greece and Bulgaria have our full support. We stand ready to provide additional support including through Frontex on the land border," EU Commission Chief Ursula von der Leyen tweeted about the unimpeded flow of migrants from Turkey to the bloc's borders in Greece and Bulgaria.

Frontex is also known as the European Border and Coast Guard Agency.

"(European Council President) Charles Michel and myself have been in permanent contact with (Greek Prime Minister Kyriakos Mitsotakis) and (Bulgarian Prime Minister Boyko Borissov)," she wrote.

The comments come after Turkey announced on Thursday that it would stop keeping hundreds of thousands of asylum seekers in its territory after an air strike on Idlib in neighboring Syria killed 33 Turkish soldiers.

Following the release of people, Greek police fired tear gas on Saturday to push back hundreds of stone-throwing migrants trying to cross the border.

"They (the migrants) didn't come here on their own. They are being sent away and being used by our neighbor, Turkey," said Greek Public Order Minister Michalis Chrysohoidis.

"Greece ... faced an organised, mass and illegal attempt to violate its borders and it withstood this attempt," government spokesman Stelios Petsas said.

Erdogan said on Saturday that 18,000 migrants had already crossed the border from Turkey to Europe, a claim which put bordering countries on high alert.

"The EU is actively engaged to uphold the EU-Turkey (migration pact) and to support Greece and Bulgaria to protect the EU's external borders," said European Council President Charles Michel following a phone call with Erdogan.

The possibility of a new wave of migrants has also spurred Austria to prepare. Austrian Chancellor Sebastian Kurz hinted that borders could be closed across the Balkans in response to Turkey's threat.

"We are in constant contact with our partners in the EU and along the western Balkan route. Should the protection of the EU's external borders not succeed, then Austria will protect its borders," Kurz said in a statement.

Turkey is under huge pressure and is creating a propaganda show by letting refugees leave the country, German Greens party MEP Erik Marquardt told DW. It's shameful that European governments were not prepared to take in a few thousand people currently stuck on Lesbos in crisis-like conditions, he said, adding that he thinks Europe is treating people fleeing war like animals.

Since a migration wave in 2015, the EU has aimed to improve its response to large numbers of asylum seekers, including the recruitment of Frontex personnel. The EU is also helping Greece develop migrant camps on islands close to Turkey that can act as screening centers. However, those camps have become extremely overcrowded.