The president of the European Commission has pledged millions of euros and a fresh deployment of border guards to manage a new wave of migration. The flare-up on the border follows tension between the EU and Turkey. 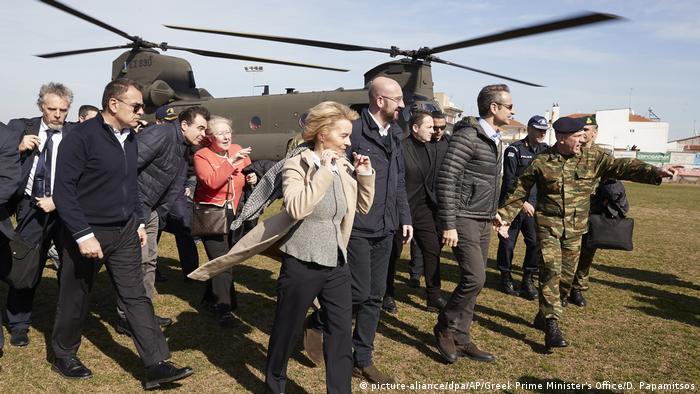 European Commission President Ursula von der Leyen on Tuesday announced a series of measures to support Greece as it prepares to manage a new wave of migration.

"In the coming days and week we will work to ensure we deliver the support that is needed. The situation is not only Greece's issue to manage," said von der Leyen during a press conference in Greece. "It is the responsibility of Europe as a whole."

Turkish President Recep Tayyip Erdogan allowed thousands of migrants to proceed towards Greece's border in recent days after a fresh Syrian regime offensive in Idlib triggered an exodus of refugees fleeing the fighting. The offensive included a brazen attack last week on Turkish forces in their Syrian outpost of Idlib.

Erdogan has also accused Brussels of failing to share the burden despite an EU assistance package earmarked for Ankara worth €6 billion.

"After we opened the doors, there were multiple calls saying, 'Close the doors,'" Erdogan said in a televised address to the nation on Monday. "I told them, 'It's done. It's finished. The doors are now open.' ... Hundreds of thousands have crossed, soon it will be millions."

Greek Prime Minister Kyriakos Mitsotakis accused Turkey of encouraging migrants to head towards the border as a way to "promote its geopolitical agenda and divert attention from the situation in Syria."

European Commission chief von der Leyen said the EU would not succumb to what some observers have described as the weaponization of migration.

"Those who seek to test Europe's unity will be disappointed. We will hold the line and we will prevail," von der Leyen said. "Turkey is not an enemy and people are not just means to reach a goal. We would do well to remember both in the coming days."

Von der Leyen said Frontex would send a rapid deployment team along with 100 new border guards to support more than 500 currently stationed at the land and sea borders. She also said Greece would have access to up to €700 million ($780 million) for migration management.

Thousands have gathered in Berlin to demand that German Chancellor Angela Merkel change her stance and support the opening of the EU borders to migrants. Migrants are attempting to cross into Greece from Turkey. (04.03.2020)