A ceasefire in northern Syria agreed between Russia and Turkey has come into force in a move to halt intense fighting in Idlib. A recent increase in violence has sparked a humanitarian disaster. 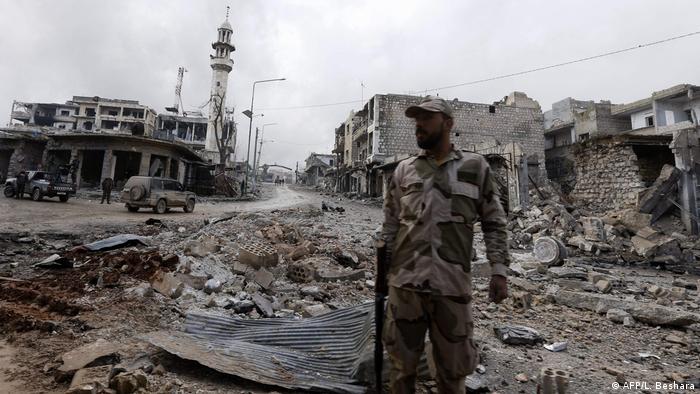 A ceasefire agreed by Russia and Turkey has gone into effect in Syria's northwestern region of Idlib, activists and a monitoring group confirmed Friday.

The temporary stop in fighting was agreed to amid concerns of a proxy war between Turkey, which supports certain rebel groups in the Syrian war, and Russia, the main military backer of the Syrian regime.

The Britain-based Syrian Observatory for Human Rights said shortly after midnight that cautious calm was prevailing on major fronts in Idlib.

The Observatory said Russian and Syrian airstrikes had halted but added that there was "artillery fire... by Syrian regime forces on the positions of insurgent groups" in areas controlled by jihadis in parts of Aleppo and Hama bordering Idlib province in northwestern Syria.

Hope of end to civilian suffering

Russian President Vladimir Putin said on Thursday that he hoped the deal would reduce the civilian suffering in the city, which has forced thousands more refugees to flee the destruction.

"We have agreed a joint document," Putin said, adding that he hoped it would "serve as a good basis for ending fighting in the Idlib de-escalation zone."

Turkish President Recep Tayyip Erdogan, for his part, said that the Syrian "regime is to blame" for the breakdown of an 2018 agreement between Russia and Turkey with regards to Syria.

The two countries also announced joint patrols along the M4 highway outside of the city.

According to DW's Russia correspondent Emily Sherwin, the talks between the two leaders went on for four hours, starting with a tete-a-tete meeting with Putin and Erdogan before ministers from both countries joined the talks.

However, she added: "There have been ceasefires in Idlib before. The question is whether this one will actually last."

Until recently, Moscow and Ankara had managed to largely avoid conflict despite having different interests in Syria. However, a renewed Syrian offensive carried out with Russian support to regain control of Idlib, the last opposition stronghold in Syria, saw Turkey respond by sending thousands of troops into the area around Idlib to repel the attack. Dozens have been killed on both sides of the battle.

The conflict has also created tensions between Turkey and the European Union. Erdogan has walked back from his obligations to a 2016 refugee deal with the bloc, opening his country's borders with Greece and Bulgaria in an attempt to force EU support for Turkey's military intervention in Syria.

Idlib crisis: The high stakes for Turkey and Russia

As violence escalates in Syria's Idlib province, Turkish President Recep Tayyip Erdogan is meeting Vladimir Putin in Moscow. Russia believes it is in a stronger position for talks — yet it also has much at stake. (05.03.2020)