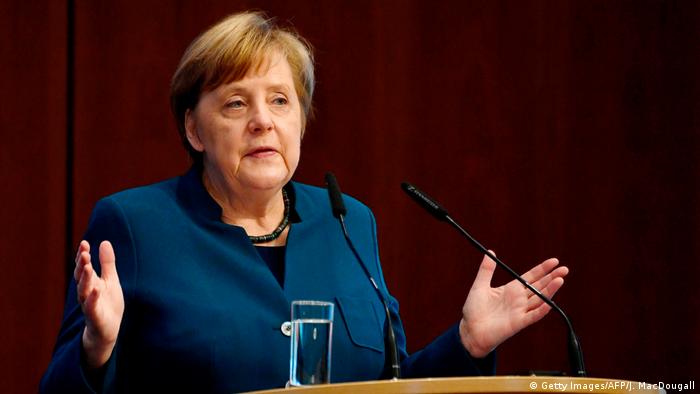 German Chancellor Angela Merkel on Monday condemned Turkey's decision to ignore the terms of a 2016 refugee pact as "unacceptable."

Tens of thousands of migrants and refugees have gathered on the Turkish-Greek border after Turkish President Recep Tayyip Erdogan announced in February that the European Union's border was open. The influx has prompted clashes between Greek forces and the migrants.

The move by Turkey violated a 2016 EU-Turkey agreement aimed at cracking down on "irregular migration" to Europe through Turkey after the 2015 European migrant crisis. Erdogan is expected in Brussels on Monday to discuss the unfolding situation.

Speaking on Monday at the German-Hellenic Economic Forum in Berlin — an event in which Greek Prime Minister Kyriakos Mitsotakis was also in attendance — Merkel said Turkey's approach "is unacceptable, and so I strongly advocate the EU-Turkey agreement being taken into a new phase."

She conceded that Turkey bears a "great burden" with its population of more than 3.5 million refugees, who are mostly Syrian. But she added that Ankara "can expect no understanding if it tries to solve its own problems on the back of refugees who then get stranded in a dead end at the Turkish-Greek border."

Merkel added that Greece "deserves our full solidarity and our full support," but said it was important to avoid situations like those during the migrant crisis five years ago.

Greek Prime Minister Mitsotakis welcomed Erdogan's visit to Brussels, saying he hoped it would lead to "the start of de-escalation of the crisis."

"There must be a concrete change in Ankara's policy," Mitsotakis said.

"Greece has always ... recognized and does recognize that Turkey has a crucial role to play in the management of the migration problem, and it needs Europe's help to do it," he added. "But this cannot happen ... under conditions of threats and blackmail, using desperate people as pawns."

Greece, across the Aegean Sea from Turkey, has long seen migrants and refugees from Turkey land on its shores. In 2019, more than 60,000 refugees from Turkey landed on the shores of Greece's Aegean islands, and the Greek government expected more than 100,000 in 2020. The large inpouring of migrants on these islands have stretched the limits of refugee camps, with several experiencing shortages of food, clothing and medicine.

On Sunday, Germany announced it was open to taking in 1,500 refugee children in the coming days as part of a "coalition of the willing."

During his visit to Brussels on Monday, Erdogan may be hoping to secure more financial aid from the EU.

"Erdogan says he wants some more support from the international community and from Europe when it comes to refugees and migrants," said DW's Turkey correspondent Julia Hahn.

"Turkey hosts nearly 4 million refugees, mainly from Syria, and now Erdogan fears another large-scale refugee influx from Idlib, where hundreds of thousands of refugees have fled to near the Turkish border," she added.

"Europe's message to Turkey is clear: We believe in a fair sharing of the burden, but we do not accept that people who find themselves in desperate situations should be misused as political pawns," Maas told the German Funke media group.

"Negotiations made at the expense of the weakest will not give the desired result," he added.

The EU has not ruled out further financial aid for Turkey to deal with the ongoing refugee and migration situation.

"However, that assumes that Turkey sticks to its part of the deal," Maas said on Monday.

Germany and the EU have repeated that the deal still stands and urged fleeing individuals not to attempt to cross the border illegally. Thousands of people took to the streets in Germany on Saturday to demand the EU accept more refugees.