Germany's federal and state governments have reached agreement on a uniform regulation for travel within the country. It comes after authorities ordered fresh lockdowns in two districts following a massive outbreak. 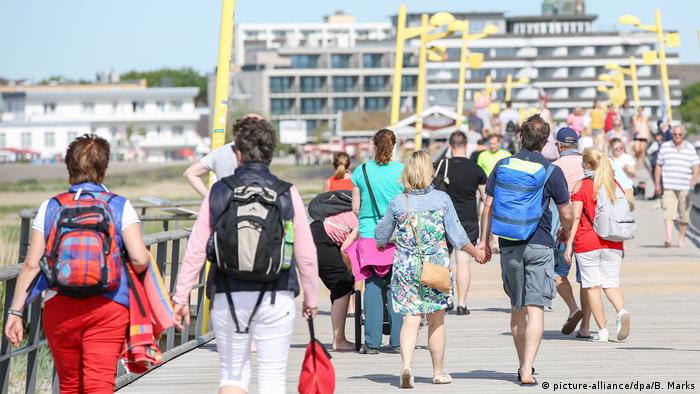 As per the agreement, people traveling from a district with a high occurrence of coronavirus infection may only be accommodated in a hotel if a medical certificate confirms that they are not infected. The medical certificate must be based on a molecular biological test carried out no later than 48 hours prior to arrival, according to the deal.

"It's good that we now have uniform regulations nationwide that take into account risk provision and freedom of travel," said the premier of the western state of North Rhine-Westphalia (NRW), Armin Laschet.

The discussion over domestic travel in Germany was prompted by fresh lockdowns in two districts in NRW after a massive coronavirus outbreak at a slaughterhouse.

Over 1,500 workers at the plant — operated by the nation's biggest meat producer Tönnies — tested positive for the virus, prompting the authorities in Germany's most populous state to put Gütersloh and the neighboring Warendorf districts under lockdown.

But of 1,655 tests carried out in the wider population in Gütersloh by Thursday, only three had come back positive, according to local authorities.

Several German states, however, have said they will turn away would-be tourists from the affected districts.

A couple from Gütersloh were booted off the Baltic Sea island of Usedom earlier in the week, while the southern state of Bavaria said its hotels would no longer take bookings from anyone from high-risk areas.

After reports emerged that people from the two districts were being targeted with insults and vandalism, the federal government condemned the incidents and said anger against them is "completely unacceptable and disgusting."

Read more: Holiday in Germany during COVID-19: What travelers need to know

"That people from Gütersloh and Warendorf are sometimes insulted, that their cars are scratched, is of course completely unacceptable and disgusting behavior," Chancellor Angela Merkel's spokesperson, Steffen Seibert, told a regular government press conference on Friday.

"We must treat each other with respect and sympathy, especially in difficult situations," Seibert said, adding that anyone could find themselves suddenly living in a COVID-19 hot spot.

NRW State Premier Laschet, meanwhile, has advised people to get tested for COVID-19 if they wish to travel elsewhere in Germany.

"For those people who are planning a holiday, we recommend that you get tested," he said. "But one thing is not OK: That people from the district of Gütersloh are openly stigmatized."

It is now counting on contact tracing — both through human trackers and a new app — to ensure new infections are isolated.