German officials reimposed lockdown measures on hundreds of thousands of people following a large coronavirus outbreak in a meat processing plant. Police were deployed to help maintain quarantine among the plant workers. 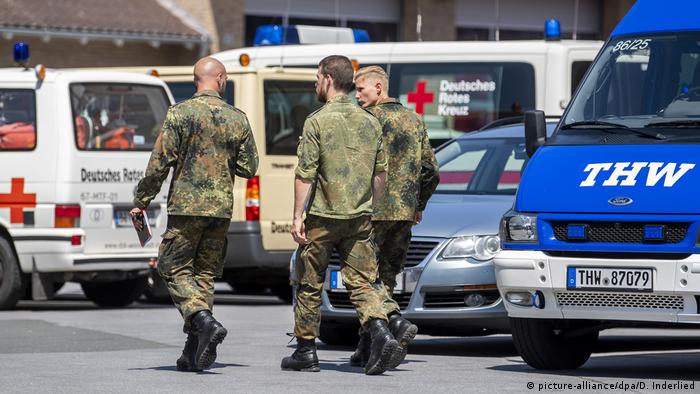 While coronavirus restrictions are easing across the most of Germany, authorities in the northwestern state of North Rhine-Westphalia (NRW) brought back the lockdown for districts of Gütersloh and Warendorf on Tuesday.

The move is aimed at fighting the outbreak at the nearby meat processing plant, where over 1,550 workers have now tested positive.

The outbreak is the "biggest infection event" in Germany so far, said NRW Premier Armind Laschet.

"We will now, for the first time in Germany, return a whole region to the lockdown measures that were in place a few weeks back" Laschet said while announcing the restrictions on Gütersloh, where the slaughterhouse is located. A few hours later, the authorities expanded the lockdown to the nearby Warendorf, where some of the workers live.

Together, the two districts are home to around 628,000 people. The authorities have now once again closed schools, kindergartens, theaters, gyms swimming pools, bars, clubs, and other public venues. Only two people can meet in public in they are not members of a single household. Officials said the measures will stay in place for at least one week.

However, Premier Laschet emphasized the measures were "preventative" ad the wast majority of the infected cases are slaughterhouse workers.

State authorities are now boosting testing to see if the virus is spreading among the general population. The medical officials are planning to test patients and nurses in hospitals and nursing homes, as well as workers in supermarkets. The would also try to determine how many workers from other companies came into contact with the people working for the meat producer Tönnies.

Hundreds of police officers were also deployed to help maintain quarantine among over 6,000 Tönnies employees, most of them migrant workers hired by subcontractors and housed in poor and unsanitary conditions. The Gütersloh outbreak is only the biggest of a series of outbreaks in similar facilities across the country, drawing the attention to German companies' abysmal treatment of workers in the meat industry.

Talking to DW on Tuesday, a Gütersloh resident endorsed the government's move but also slammed Tönnies co-owner Clemens Tönnies for failing to tackle the infection.

"Of course [the lockdown] is the right course of action, but it's a scandal that Mr. Tönnies would allow this rubbish to happen," he told DW's Amien Essif. "It could have been stopped sooner."

On Tuesday, another outbreak was reported in a different meat processing plant located in the German state of Lower Saxony, with officials testing 50 workers and finding 23 are positive for the coronavirus.

Germany's meat industry is a valuable part of its economy, but it is being heavily criticized following multiple coronavirus outbreaks. DW looks at the money big companies make, and conditions for workers. (19.06.2020)

German church at the center of over 100 coronavirus cases

A man has died after becoming infected with COVID-19 at a Pentecost service in the northern city of Bremerhaven. This isn't the first time a church in Germany has been at the center of an outbreak. (14.06.2020)