The treatment of workers at Tönnies, Germany's leading pork producer, has been criticized for years. But it's only now, amid the pandemic, that change seems likely. Miodrag Soric reports.

The apple on the windowsill looks fresh; the two rickety bedframes in the room still have linen on them. "There were about 13 workers living in this house until recently," says Inge Bultschnieder, who has been fighting for years to gain better conditions for meat packers at Tönnies, most of whom come from Bulgaria, Romania, Poland or North Macedonia.

Bultschnieder points toward the corners of the room, where purple-gray mold covers the wall. The front door is open, but it still stinks in this ramshackle house in Rheda-Wiedenbrück, southwest of Bielefeld. Behind the building in a dumpster is an old refrigerator, apparently still full of meat. "Meat from Tönnies that is going moldy," says Bultschnieder, holding her nose. 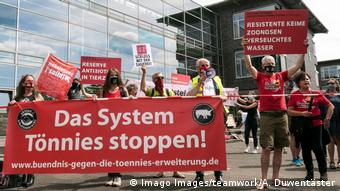 Rights groups have protested conditions at the Tönnies plant for years

Years ago, she organized demonstrations in front of this house and others like it to draw attention to the conditions in which the Eastern European factory workers were living.

"No one at the Tönnies company was interested, or from the city administration, either," she says.

But with the COVID-19 pandemic, all that has changed. Police, municipal and health officials and army personnel are running around everywhere in Rheda-Wiedenbrück these days. All the staff and workers at Tönnies are being tested for the coronavirus, along with some suppliers. So far, there have been more than 1,500 positive test results.

Bultschnieder first became interested in the cause of the factory workers after sharing a hospital room with a woman from Bulgaria in 2012. The latter told Bultschnieder about the poor working conditions at Tönnies, the excessive overtime hours and the miserable living conditions for the workers.

Bultschnieder set up an action group and organized demonstrations. But little changed at Tönnies, where workers are mostly employed by subcontractors, officially at least. This is one reason it's difficult to hold the huge meat packing company legally responsible for the sometimes degrading conditions in which its workers live.

"Everyone knew how things were with the workers from Eastern Europe," says one passerby in the inner city. "And if residents here knew, then the responsible municipal officials, the regional and state politicians and the employees in charge at Tönnies certainly did as well."

Other people walking past nod in agreement. They're now afraid the dangerous virus will rapidly spread to the rest of the population, though the Tönnies case was a unique situation. The disease spread as quickly as it did among the workers partly because they were living in such cramped conditions, but also because they stand so close together in the cool air of the meat processing plant.

"There are people in Rheda-Wiedenbrück who are very willing to help others, the sort that also became involved during the refugee crisis in 2015," says Gudrun Bauer, who has been a council member for the center-left Social Democrats since 1999.

But she says she has noticed a rise in xenophobia as well, telling of phone calls where residents denounced Tönnies workers for allegedly going to the public swimming pool or supermarket despite quarantine restrictions. Some people were equating the dangers of the coronavirus with people who "look different," Bauer says. "That worries me."

The workers from Tönnies live in a number of very different houses throughout Rheda-Wiedenbrück and the many surrounding towns. Bauer points to one house just a few minutes' walk from the picturesque marketplace with its cafes and restaurants.

Two men are sitting on the balcony of the three-story building, looking into the distance and smoking. The building is under quarantine and they're not allowed to leave. They come from North Macedonia and don't speak any German, just a little English.

No one has brought them anything to eat for days, they say. They are unhappy about not being able to call their families at home because they're not allowed to leave the house, and their rooms don't have internet. Bauer shakes her head and promises to do something about it.

For Inge Bultschnieder, who has been demonstrating on behalf of the workers for years, it's no coincidence that politicians like Bauer are now taking up the cause. "Without the coronavirus crisis, a lot of politicians, the Tönnies company and the residents probably wouldn't care much about the factory workers," she says.