A major coronavirus outbreak in Europe's biggest meat-processing plant was a disaster that was bound to happen and just as preventable. 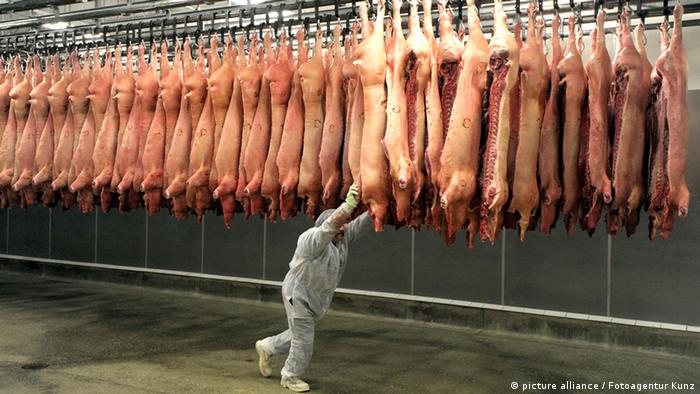 What adjective best describes a person who will risk someone else's life just to get richer? Ruthless? Unscrupulous? Hungry for money? Willing to disregard human rights, even?

The management of Tönnies, Germany's and Europe's largest meat-processing company, could certainly be labeled as such. Why? Because it has known for months how vulnerable its workers, like so many others in the meat-processing industry, are to a potential coronavirus outbreak. Yet, it did nothing to reduce the risk.

It was merely a question of time until a major outbreak would occur in the company's main slaughterhouse. Workers in this industry, who tend to hail from eastern and southern Europe and are employed by sub-contractors, often endure dismal working and living conditions. It's common for laborers butchering dead animals to work side by side, standing close to each other all day, and to share cramped living quarters, where social distancing is impossible.

For months, human rights activists, labor rights experts and doctors have demanded that workers be given a bedroom each to reduce the risk of a coronavirus outbreak. Clearly, Tönnies managers opted against taking this basic safety precaution, as it would have slightly diminished their profits.

Unlike their German colleagues, meat-processing workers from Poland, Romania and Bulgaria earn a pittance — albeit a little more than they would make in most jobs back home. Nevertheless, the dire working and living conditions they have to put up with in Germany effectively make them modern-day slaves. This is a blatant breach of the German constitution, which states that human dignity shall be inviolable. That Tönnies is exploiting these desperate people to turn a profit is simply immoral.

In this light, the company's efforts with regards to animal welfare or its investment in football — Clemens Tönnies is on Bundesliga club Schalke 04's board —  smack of hypocrisy. More than half the 6,000 workers at its main headquarters are employed by sub-contractors. This allows Tönnies to save labor costs, maximize profits, and enhance its competitiveness. The company has outpriced many global competitors and even exports meat to countries like Romania and China.

If you want to see the dark side of globalization, go and visit the northwestern town of Rheda-Wiedenbrück, where the company has its head office.

Many locals who live near the Tönnies' headquarters have cared little for the company's controversial practices. Well paid jobs in this part of the country, after all, are hard to come by. In the past, the company has exerted considerable influence on regional and local lawmakers, who turned a blind eye to the mistreatment of foreign workers.

Now, public opinion is changing. Lawmakers are distancing themselves from company boss Clemens Tönnies, as are co-owners of the high-profile company. Locals, meanwhile, are enraged because the recent virus outbreak has led to the closure of schools, preschools and kindergartens in and around Rheda-Wiedenbrück and the nearby, bigger city of Gütersloh.

What will the German federal government do? Allow Clemens Tönnies to get away with these practices? Or will it finally push for a change in Germany's agricultural sector?

It would certainly be preferable to start strengthening local, smaller slaughterhouses over major meat-processing plants, like those operated by Tönnies or Westfleisch. Yes, it would make meat more expensive. But surveys show many Germans would be willing to foot the bill.

In the end, workers must not be the ones left behind in the slaughterhouse.

US starts flying Haitian migrants home from Texas 2h ago