Coronavirus: ′Modern slavery′ at the heart of German slaughterhouse outbreak | Germany | News and in-depth reporting from Berlin and beyond | DW | 11.05.2020

Just as lockdown measures are lifting, more than 200 employees at a slaughterhouse in western Germany have contracted COVID-19. DW spoke to workers living in dilapidated, crowded conditions.

I'm standing outside a run-down, two-story brick building in the village of Rosendahl, in the western German state of North Rhine-Westphalia. One of the residents, a man of around 50, tells me the home has been placed under quarantine "because of coronavirus."

His grasp of English and German is limited, and he wants to remain anonymous, but he tells me he's from the Romanian city of Sibiu.

The man doesn't seem to understand that having his house under quarantine requires him to stay inside. He's wearing a paper mask, but it dangles loosely around his neck. The man works at the Westfleisch slaughterhouse in nearby Coesfeld, along with a number of other Romanians, Bulgarians and Polish people.

Authorities have temporarily closed the slaughterhouse after news broke that an unknown number of workers at the site had become infected with the coronavirus. As of Monday afternoon, at least 249 people had tested positive for SARS-CoV-2, the virus that causes the COVID-19 disease — many of them foreign workers.

The Romanian man cannot say how many of his compatriots live in his building. He estimates 12, possibly more. The mailbox outside is covered with Romanian surnames, but nothing has been posted to indicate that the house has been placed under quarantine. No official notice, no handwritten sign, nothing. As we continue our conversation, another Romanian worker returns from the nearby supermarket, carrying a carton of eggs under his arm.

Anne-Monika Spallek, a spokeswoman for the Coesfeld Green party, says nobody has taken responsibility for the workers' health and safety conditions. The problem has been "pushed back and forth between the local municipality, the region and the state," with no one willing to act. One reason, she suspects, has to do with the fact that Westfleisch workers from Eastern and Southeast Europe are officially employed by a subcontractor, with German public health officials only getting involved once someone has been infected. 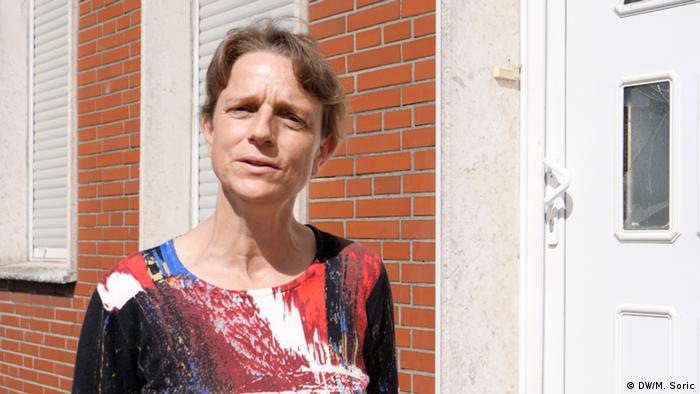 Anne-Monika Spallek is the spokesperson for the local Green party

Spallek doubts the subcontractor has taken the legally required steps to prevent coronavirus from spreading inside the workers' dorm. Every worker should have a room to himself, she says, and those infected with the virus should swiftly be isolated from the rest of the workers. Those forced to live under quarantine, among them the man and his fellow workers in Rosendahl, should be receiving deliveries of groceries and other essentials — not going out in public to fend for themselves.

A few minutes later, a minibus stops outside the house. Local authorities, immigration officers and public health workers — all clad in protective gear — head inside, it seems to start systematically testing workers for SARS-CoV-2. It will later emerge that authorities in Coesfeld carried out swab tests on 930 Westfleisch workers.

A woman who lives across the street from the workers' home tells me that authorities were slow to act and says she feels sorry for the foreigners. "They are poor people, put up in squalid conditions and exploited," she says. An older man passing by on his bike says many locals now avoid the nearby supermarket, fearing they could contract the virus from one of the Romanian workers.

A 15-minute drive away, Peter Kossen and a friend are protesting outside the main entrance to the Westfleisch slaughterhouse. Kossen, a 51-year-old Catholic theologian, is holding up a sign that reads "End modern slavery." They are appalled at how the workers have been treated.

"This catastrophe was on the horizon for weeks," says Kossen, adding that many foreign workers live "crammed into moldy dorms and decrepit homes," making it impossible for them to keep a safe distance from each other. And, he says, the same applies for the "overcrowded buses that are used to shuttle workers to the slaughterhouse." 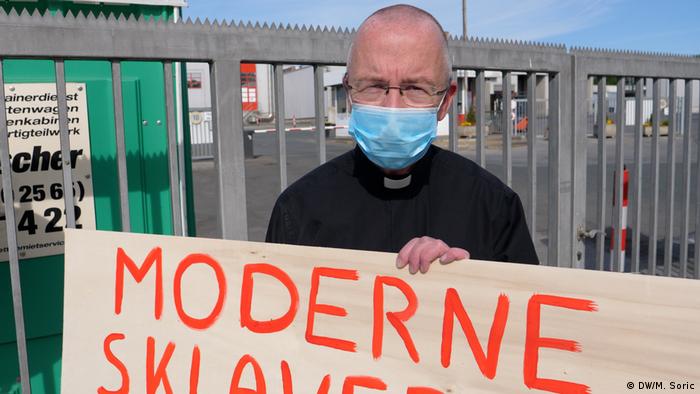 Just behind Kossen, trucks and workers can be seen leaving the site at regular intervals, even though officially the slaughterhouse has been temporarily shut down. The Westfleisch website, meanwhile, states that all workers infected with SARS-CoV-2, and those who came in contact with them, have been told to self-isolate at home. The company says it's keeping in close contact with its employees.

This scandal has far-reaching consequences for the local municipality. While the state of North Rhine-Westphalia will ease some of its lockdown restrictions on Monday, Coesfeld municipality will keep them in place at least until May 18.