′Employees are not to blame′ for coronavirus outbreaks | Germany| News and in-depth reporting from Berlin and beyond | DW | 19.06.2020

'Employees are not to blame' for coronavirus outbreaks DW: There are conflicting reports about the current situation at Tönnies' Rheda-Wiedenbrück plant. Has production continued since the coronavirus outbreak, or has it been halted? 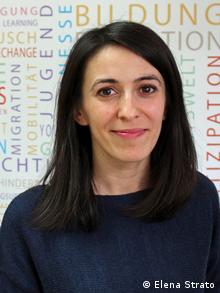 Elena Strato is an adviser to the Consolidation of the Right to Free Movement of Workers campaign, which is sponsored by a labor education alliance between unions and community colleges in the state of North Rhine-Westphalia

Elena Strato: Those workers seeking my advice inform me that production continues and will do so until existing inventories have been processed. After that, the plant is scheduled to be closed until further notice. Some production lines have already been shut down or are manned by fewer workers.

Were you surprised by the outbreak at Tönnies?

No, the current situation doesn't come as a surprise. There are a number of other meatpacking plants with similarly reprehensible working conditions. The same goes for their labor contracts, cramped cafeterias and the housing of their Eastern European employees.

It is imperative that employee concerns be clearly and transparently addressed — immediately. There is an atmosphere of great uncertainty right now, both among factory workers and the local population in Gütersloh. The situation is very tense.

Are Eastern European workers to blame for the coronavirus outbreak at Tönnies? That was the claim initially put forth by the company's crisis management group. Later, North Rhine-Westphalia State Premier Armin Laschet made headlines by suggesting that the plant's coronavirus outbreak could be traced back to Romania and Bulgaria.

All the more reason to point out that employees are not to blame for the situation. Rather, the problem stems from a network of major companies and their subcontractors, who run a well-oiled system designed to let them shirk their own responsibilities as to the dangerous work and living environments they subject their employees to.

Replies to our inquiry voicing skepticism about the claim that workers brought the coronavirus into the factory upon returning from their home countries can only be described as cynical, almost to the point of being absurd.

Employers must do more to ensure worker safety than put up a few disinfectant dispensers and measure temperatures when workers punch in. Housing conditions and access to proper hygiene must be measurably improved.

When it comes to Romanian workers, travel restrictions into the country and mandatory two-week quarantine upon arrival didn't end until June 15. Employees say they have been working the whole time and haven't been allowed to take vacation for months. Many tell us of 10- and 12-hour workdays at least six days a week. You have to remember it is barbecue season: Demand for meat is high right now.

The coronavirus pandemic and subsequent border closings kept producers from importing foreign labor from Eastern Europe like they normally would, forcing them and their subcontractors to work with laborers who were already in Germany. Those facts along with what workers are telling us clearly disprove claims suggesting the outbreak came from foreign workers.

How is the mood among the workforce?

Employees are very scared to talk about the situation. They are under a lot of pressure from subcontractors, who have threatened to fire them if they talk publicly or draw attention to themselves in any way. Moreover, they are worried about their own health as well as payment for time spent in quarantine. There have been a number of reports stating that employees regularly fell ill and were sent home from work during this time. Again, they were told to keep quiet about it.

It is not easy to prove workers' claims in this context. We are dealing with a system that has efficiently covered up labor abuses for decades. Policymakers sent a clear signal with their planned ban on hourly-wage contracts for employees within the EU. Another step would be to introduce clearly regulated, sustainable and comprehensive control mechanisms to ensure worker safety: measures that would force meat manufacturers and their subcontractors to take responsibility for the situation and finally do something to improve it.