Officials in northwestern Germany have insisted the wider community is not yet at risk. But they complain that they've lost trust in the country's largest meat processing firm over delays in contacting staff.

The total number of people infected with the coronavirus at a slaughterhouse in northwestern Germany has risen to 1,029, up from over 600 earlier this week, according to officials.

The outbreak at the Rheda-Wiedenbrück meat processing plant, in the district of Gütersloh near Bielefeld, was made public on June 17. The plant is run by Tönnies – the largest meat processing firm in Germany.

The factory has been closed for 14 days following initial reports of the outbreak, said Thomas Kuhlbusch, the head of the crisis team.

Regional official Sven-Georg Adenauer told a news conference on Saturday that there had been no "significant introduction of coronavirus" into the community.

A quarantine has been ordered for all 6,500 workers, most of whom are from Romania and Bulgaria and who live in cramped company-provided accommodation. More than 3,000 workers have been tested so far.

A mass screening for COVID-19 went ahead at the site on Saturday and some 65 German soldiers were brought in to assist with documentation and contact tracing, said Bundeswehr spokesperson Uwe Kort.

The soldiers were picked because they speak Eastern European languages, said Kort, and can more easily explain the testing process to the workers.

Despite the increased testing program, authorities have reported difficulties gathering the addresses of staff members.

On Friday morning, addresses of around 30% of the workers were still missing, forcing authorities to gain access to Tönnies' personnel files.

"The trust that we have in Tönnies is zero, I must state that clearly," said Adenauer, responding to the difficulties faced by officials. 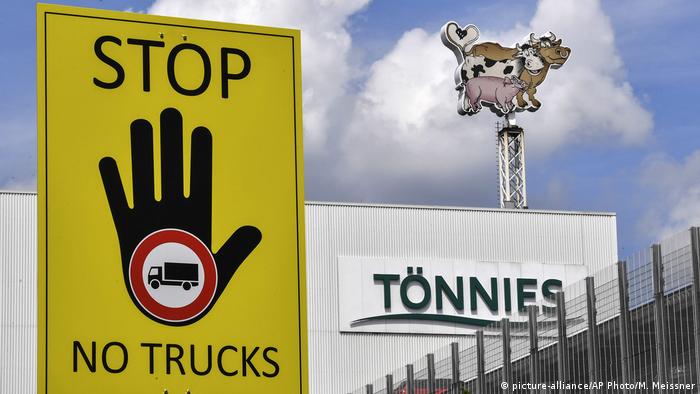 In a separate news conference later on Saturday, the firm's joint managing director Andres Ruff thanked the authorities for their work at the plant since the "frightening" first test results on Wednesday.

The firm's representatives had spoken "calmly and factually" with officials and insisted that delays in handing over personnel data had been down to Germany's strict data protection laws. "It was data that we shouldn't really have accessed," added Ruff.

Clemens Tönnies, the other managing director, spoke of an "existential crisis" within his firm. He ruled out resigning, saying he wanted to lead his company and employees through the outbreak.

About 60 people gathered outside the Tönnies factory on Saturday to protest against the consumption of meat and against the unsafe conditions they say workers are forced into. Several covered themselves with fake blood, but police said the event went off peacefully.

Armin Laschet, the state premier of North Rhine-Westphalia — the state where the plant is located — said he believes the outbreak can still be contained through a localized quarantine.

"Should this change, a comprehensive lockdown in the region may also become necessary," said Laschet on Friday in Düsseldorf.

The outbreak is one of several reported at German meat-processing plants over the past two months. As a result, living and working conditions for employees in the sector, which are often cramped and unsanitary, have come under increased scrutiny.

The new rules agreed by the German government take aim at the meat industry's widespread use of subcontractors and seeks to bolster the rights of migrant workers. DW takes a look at what the changes mean. (20.05.2020)

A major coronavirus outbreak in Europe's biggest meat-processing plant was a disaster that was bound to happen and just as preventable. (19.06.2020)

Dozens of people have been infected with the coronavirus at a slaughterhouse in the state of Lower Saxony. The German government has postponed talks on long-standing complaints about the country's meat industry. (18.05.2020)