The new rules agreed by the German government take aim at the meat industry's widespread use of subcontractors and seeks to bolster the rights of migrant workers. DW takes a look at what the changes mean. 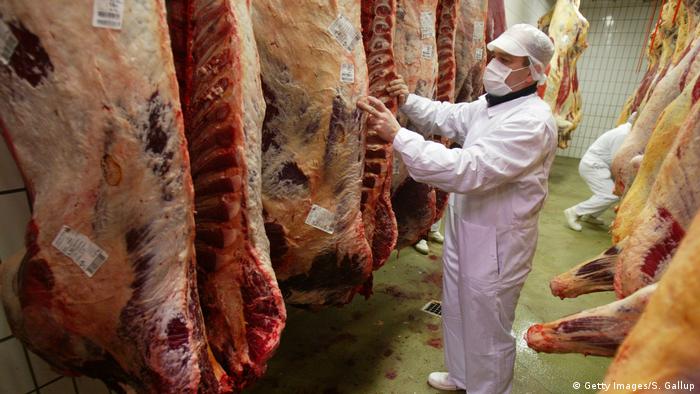 After tense discussions and delays, German Chancellor Angela Merkel's government agreed on a framework of new regulations for the meat industry on Wednesday.

Labor Minister Hubertus Heil spearheaded the push for more regulation in the country's powerful meat sector after new COVID-19 hotspots erupted at several slaughterhouses across the country, with hundreds of migrant workers from Eastern Europe infected.

In announcing the changes following a Cabinet meeting, Heil said that the coronavirus crisis has made clear that the situation in the meat industry "not only endangers the employees, but the public."

The new regulations will be put into a draft law which will have to be approved by parliament.

The new rules particularly take aim at the use of subcontractors in the branch and seeks to make German meat packing plants and large slaughterhouses responsible for their largely migrant workers.

Starting in January 2021, slaughtering animals and processing the meat will only be permitted for employees of the meat packing plants themselves, news agency DPA reported citing a draft of the agreement.

Currently, many of the workers in Germany's meat industry are hired by subcontractors. Next year, these types of labor arrangements, known as Werkverträge in German, will be banned for the meat industry. The new rules, however, will primarily apply to meat packing plants and not for smaller butchers.

Fines for violating working time regulations will be raised to a maximum of €30,000 ($32,800). Previously, the fines were capped at €15,000. There will also be a digital system for logging working hours to better ensure people are not working longer than the legal limit of 10 hours per shift.

Employers that provide living accommodations for their workers will also be responsible for providing authorities with information about where their migrant workers are living.

How does subcontracting work in the meat industry?

These types of contracts mean the German companies are not legally responsible for the personnel, leaving workers vulnerable.

Critics have also argued that migrant workers are often shorted their pay or charged extra fees by subcontractors for work expenses.

Why are the changes happening now?

Although criticism of the health conditions for workers at meat plants isn't new, the coronavirus pandemic has served as a catalyst for change.

Over 260 cases at a plant in Coesfeld in the western state of North Rhine-Westphalia have been confirmed. A slaughterhouse in the northern state of Schleswig-Holstein logged over 100 cases while another plant in Bavaria reported around 60 cases.

Over the weekend, a new outbreak emerged at a slaughterhouse in the state of Lower Saxony, with at least 92 employees testing positive.

Labor Minister Heil's plans were backed by Agriculture Minister Julia Klöckner, who said that tougher action was needed to curb abuses in the meat industry.

"The delegation of responsibility to subcontractors comes at the expense of many workers. There's an obvious need for adjustment here," Klöckner said on Wednesday.

Meat industry representatives pushed back against the new regulations, warning that the move could have serious economic consequences for businesses and could prompt them to leave Germany.

Heike Harstick, the head of the German Association of the Meat Industry (VdF), described the COVID-19 outbreaks at slaughterhouses as "isolated cases" in an interview with the Funke Media Group ahead of the announcement.

She also accused Heil of getting "riled up" by labor unions without having "real technical and factual knowledge" of the meat industry.

Renate Künast, the food policy spokesperson for the Greens and former agriculture minister, said that the meat industry and subcontractors have taken advantage of freedoms within the European Union to keep costs low.

"I have the impression that it's a kind of abuse of the EU's freedom of movement. With the EU, you have the free movement of workers and you have people from other cities and areas that perhaps don't have such a good economic development, who are happy to have jobs," Künast told DW. "But they're being exploited to the fullest — and it's twofold, both in terms of their wages and their health."