Foreign workers are forced to endure inhumane living conditions so that we can eat cheap meat. Politicians can no longer ignore what's happening at German slaughterhouses, says DW's Miodrag Soric. 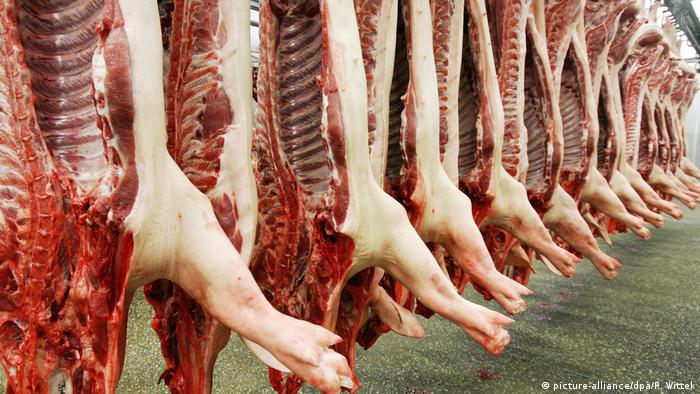 We're all familiar with the saying "there is no such thing as a free lunch." In life, everything comes at a cost, and this also holds true for the cheap meat that consumers in rich, industrialized nations love to eat.

After hundreds of Eastern European laborers employed at the Westfleisch slaughterhouse in North Rhine-Westphalia tested positive for the coronavirus, it clear is that the workers are the ones paying the price — sometimes with their lives — for this cheap meat. Sure, Westfleisch, Germany's third largest meat processing company, has stated it carries responsibility for its workers. But look closer, and you'll see the company only has a small number of actual employees. Most workers in the industry are hired by subcontractors, who mainly employ Romanians, Bulgarian and Poles.

The meat industry relies on this loophole to cut costs. And on paper, companies like Westfleisch carry no responsibility for the inhumane living conditions that the hundreds of foreigner workers staffing their slaughterhouses in Germany have to endure.

The subcontractors, in turn, argue its the government that should be setting and enforcing basic labor and health standards. But in Germany, this is the prerogative of the respective municipalities or federal states. All of this has led to passing the buck, with nobody willing to step in. And while the North Rhine-Westphalia state labor minister has bemoaned a tendency to turn a blind eye in the meat industry, he has not taken action, either. No lawmaker has, for that matter.

It's an open secret that for years, laborers from Eastern and Southern Europe have been breaking their backs doing piecework in German slaughterhouses, and languishing in squalid living conditions. Westfleisch management knows this full well, as do the subcontractors, local officials and police, Coesfeld district administrators, North Rhine-Westphalia state authorities and even federal lawmakers. Coesfeld residents are aware of the situation, and so too are residents in neighboring towns. They cross paths with workers at the local supermarket and bakery, after all. Until recently, barely anyone seemed to be bothered by the status quo, with many arguing these workers come to Germany voluntarily, earning more money than in their respective home countries.

A virus that threatens everyone

The coronavirus pandemic has changed everything, however. If three or four workers are crammed into a single room, the risk of an outbreak is significant. And this risk of course poses an immediate danger to nearby communities. Without the coronavirus pandemic, one might argue, somewhat cynically, that most Germans would have continued to ignore these workers' dismal living conditions.

This scandal, incidentally, has global ramifications. Germany's meat industry is so competitive that it even exports all the way to China. German companies can offer cheaper products than their global competitors. But, to keep prices low, companies pressure farmers to cut costs, too. Consequently, pork farmers keep animals in tiny pens and given them antibiotics so they don't get sick. They are fed with cheap soy or corn, which is imported from South America, where vast swathes of rain forest are cut down to grow these crops. This, in turn, harms the climate and drives up the cost of land.

We are all paying the price

In the end, we are all paying a high price for cheap meat. Animals reared on antibiotics mean humans are growing resistant to certain drugs, and the meat industry pollutes our ground water as too much animal waste ends up in our fields.

Industry leaders and politicians have long known about these ramifications. Everyone understands that the only way to change things is to switch to smaller, decentralized businesses that produce high-quality meat in smaller quantities. This would presumably reduce their revenue, because it would no longer pay to export pork to China. This would also surely drive up the price of meat here in Germany. Surveys, however, show that a large majority of Germans would favor transitioning to a more sustainable form of agriculture. What we need, then, is the determination, courage and leadership to get us there.

Germany’s first confirmed case was on January 27. Since then, the virus has officially killed nearly 7,000 people, but the country has so far avoided even worse fates suffered elsewhere. (06.05.2020)

UN's Bachelet arrives in China, will visit Xinjiang 12m ago

Opinion: Russia must be held accountable for Ukraine's reconstruction 18h ago