Germany’s first confirmed case was on January 27. Since then, the virus has officially killed nearly 7,000 people, but the country has so far avoided even worse fates suffered elsewhere. 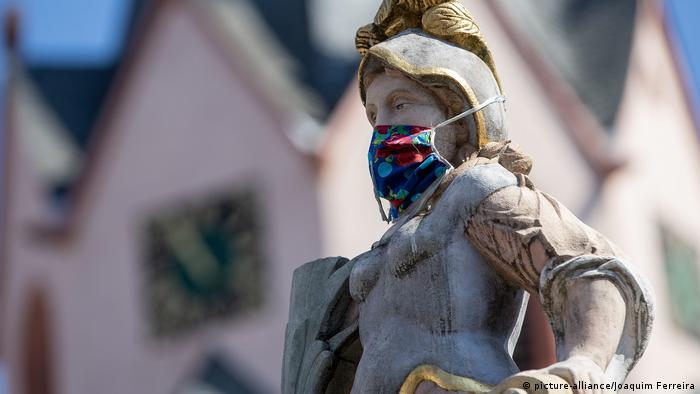 Germany's coronavirus "patient zero," who recovered, was a man from outside of Munich. How public health officials there reacted would go on to become the country's standard operating procedure for the 160,000-plus confirmed cases to come.

Test, isolate, trace: A decentralized yet comprehensive strategy is partly responsible for keeping the death toll relatively low, winning Germany both praise in international media and time in the battle against the outbreak. German health officials have said the country's health system has "at no point" been overstretched, a standing helped by delaying regular medical procedures and redirecting resources to tackle the outbreak.

"We are on alert and well prepared. We are in regular contact at the international and European levels, as well as with the German federal states," Health Minister Jens Spahn told reporters on January 29, two days after the first case was confirmed.

Business and borders remained open. Berlin's international film festival, the Berlinale, took place as usual in the middle of the month, bringing thousands of people from around the world to the capital for well-attended screenings and tightly packed after parties.

The official risk assessment for Germany remained "low," according to the Robert Koch Institute (RKI) for public health. "Coronavirus will come to Germany," RKI President Lothar Wieler said on February 24. "But it won't explode. Rather it will be slow and affect certain regions."

That view rapidly changed. Moving into March, the RKI upgraded its risk assessment to "moderate." The first cancelations started to hit major events, such as Berlin's International Travel Trade Show, and more were under discussion.

Berlin's first official case on March 2 was only detected by "coincidence," said Ulrich Frei, the chief medical officer of Berlin's Charité teaching hospital. The world-renowned hospital, which developed the world's first coronavirus diagnostic test, had decided to test any patient showing flu-like symptoms for both flu and the novel coronavirus.

Absent that decision, or had the patient gone elsewhere, Berlin could have followed northern Italy down the path of catastrophic contagion. Even with the measures, the hospital had to shut the emergency center the patient had entered and send several of its staff home as a precaution.

Chancellor Angela Merkel broke her silence the same day the WHO declared COVID-19 a global pandemic. In a March 11 press conference, she put the eventual number of infections at 60 to 70 percent of the population.

It was not a wild figure, one supported by new research from University Hospital Bonn that suggests the true number of infections may be ten times higher than the official count. Still, it was staggering to hear. Merkel was both criticized for alarming the public and praised for her candor.

More frankness followed. With schools and borders closing, and public life in general coming to an unprecedented halt, Merkel made a rare televised address to the nation on March 18. She called the pandemic German society's "greatest challenge since World War Two." For a country whose history is pockmarked with tyranny and turmoil, the superlative was not mere rhetorical hyperbole but a plea to the public to follow the social distancing guidance.

Polls have shown widespread support for it, as well as renewed appreciation for both Merkel and her conservative party, which had been struggling for months. Merkel's popularity surged to as much as 80 percent.

Some outside observers have heaped uncritical praise on Germany, dubbing Merkel the country's "scientist-in-chief" as a foil to the political missteps and trust deficit in the United States and United Kingdom, where mortality rates are nearly four times higher than Germany's.

Others have been less sanguine, attributing Germany's success partly to a healthy dose of good timing and good luck: COVID-19 spiked later and hit younger people earlier. Only recently have deaths ticked up, as the virus has made its way into nursing homes. More than a third of all deaths come from such facilities. RKI data show that people over the age of 70 comprise 87 percent of deaths, but just 19 percent of cases.

"We are humble, not overconfident" Health Minister Jens Spahn has said repeatedly, though he has not been shy to tout Germany's widespread testing. While testing has been robust, it is not as aggressive as it might first seem. Per capita, Germany has tested about as much as Italy, and capacity has always far outpaced actual tests. Nationwide, labs say they are processing about half their potential output of 860,000 tests per week; the RKI has said adequate testing starts at 1 million per week.

Pandemic restrictions came into force in waves and over the course of several days, which was ample time for an outbreak to silently spread. They were applied and enforced unevenly, as well, due to Germany's federal structure that leaves implementation of nationally-agreed measures in the hands of the 16 federal states.

With April spent largely under national house arrest, the same piecemeal approach is taking place again as Germany slowly eases restrictions. Every state requires masks in public, but some states are going faster and further in other regards. Courts have ruled it discriminatory to base business reopenings on store size.

"I fear we're going to see a lot of creativity in the interpretation of [the reopening] plan," Germany's top virologist, Christian Drosten, told The Guardian. "I worry that the reproduction number will start to climb again, and we will have a second wave."

Germany's reproduction number, which indicates how quickly a disease is spreading, has been teetering under one. Health experts like Drosten want it to stay there or lower. As Germany inches back towards normality, they'll be holding their breath to see if it does.