Berlin admitted shortcoming in its efforts against racism, xenophobia, and discrimination during a UN human rights review. While many UN members raised issues with Germany, others praised it for taking in refugees. 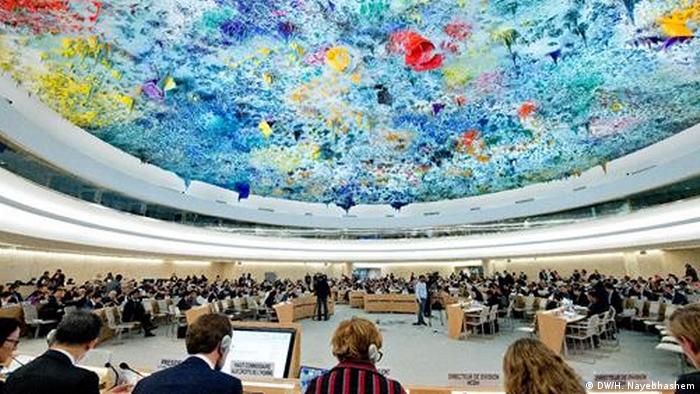 UN member states posed critical questions to Germany about its policy against racism and discrimination on Tuesday, during a regularly scheduled review session of the UN Human Rights Council in Geneva.

Despite Germany's positive reputation on human rights, the country has faced a rise in ethnic-charged violence since the 2015 refugee crisis. Authorities recorded around 5,700 attacks on refugees and refugee centers in recent years. The German government has also warned of a rise in anti-Semitism.

During the Tuesday session, the UK wanted to know about Germany's answer to anti-Semitic violence and attacks on asylum seekers. Separately, Brazil urged Germany to protect its places of worship, including synagogues and mosques.

"Despite Germany's efforts, hate speech remains widespread," the Egyptian envoy warned, with Bahrain representative saying her government was "concerned about attacks against Muslims."

Belgium recommended that Germany train its police to fight racism and discrimination, but also demanded information on Germany's efforts against child pornography and prostitution. Sweden asked how Berlin intended to increase the number of female lawmakers.

In turn, Germany pointed to new policies to fight discrimination, such as hiring police officers with immigrant roots and the newly appointed anti-Semitism commissioner.

"There are new developments and challenges that require action in Germany, as well," said Bärbel Kofler, the German government's commissioner for human rights policy and humanitarian aid. "We know we have to move against racist attitudes and discriminatory views in various parts of our society."

"Racist statements on the internet are being prosecuted more vigorously."

AFD says they are victims of discrimination

In addition to Kofler, several German lawmakers also attended the session, including Jürgen Braun of the far-right AFD. On the sidelines of the Geneva session, Braun said there was no major racism problem in Germany and that the most pressing human rights problem is the lack of adequate media representation for his party. He also said that the diversity of public opinion was shrinking in Germany.

Germany faced a similar grilling in 2009 and 2013 within the Universal Periodic Review of human rights set up by the UN's Human Rights Council. The council has 47 members, but all of the 193 UN members are allowed to take part in the review. Germany can either accept or reject recommendations of other countries. In 2013, Berlin accepted over 160 out of 200 recommendations.