About 150 asylum seekers have confronted police officers in a small German town to prevent the deportation of a Togolese man. Authorities said, due to exceptional circumstances, they had no option but to release the man. 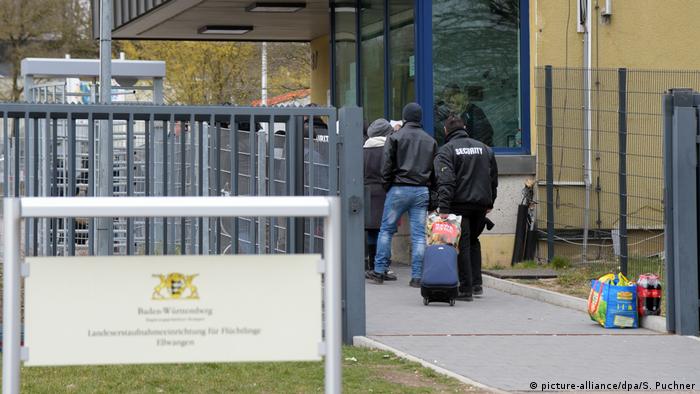 A refugee, who was due to be deported by authorities in the German state of Baden-Württemberg, has disappeared, after about 150 asylum seekers attacked two police patrol cars that had been ordered to remove him, police admitted on Wednesday.

The incident took place in the town of Ellwangen, between Nuremburg and Stuttgart, early on Monday morning.

Four officers arrived at a migrant reception center in the town to collect the 23-year-old Togolese man, officials said.

The refugee group then started attacking the patrol vehicles, and harassed and punched the officers, before giving them an ultimatum to free the man.

"They were very aggressive and ordered us to leave the man (...) behind," said one officer who was involved in the fracas.

Due to the seriousness of the threat, police at the scene said they ordered a security guard to find the key to unlock the asylum seeker's handcuffs. He then fled the scene.

Although about 20 officers and officials were eventually involved in the standoff, police said they had no time to call in additional back up from other police forces.

The incident was immediately seized upon by the regional leader of the Alternative for Germany (AfD) party, Bernd Gögel, who described it as a case of the state being "blackmailable."

Other politicians demanded that those behind the attack be found and punished, including Uli Sckerl, a Green party spokesman in Baden-Württemberg's state parliament.

"Attacks on police officers are unacceptable," he said. "In a constitutional state, such conduct must have criminal consequences. It's clear that frustration is no excuse for crime."

The officers' actions were praised by Bernhard Weber, Vice President of the Aalen Police Headquarters, who told the German news agency DPA that although the attack justified a violent response from police, the officers "kept a cool head."

Another Police spokesman Bernhard Kohn, told the online edition of Germany's Focus magazine that officers "face a question of proportionality."

"Just to carry out a deportation, a violent confrontation with such a large crowd would not have ended well."

German daily Die Welt cited government figures that revealed how Baden-Württemberg had witnessed the largest increase in refugees convicted of crimes being deported directly from prison last year. Some 488 prisoners from the state were repatriated after serving their sentences.