Thousands of deportations fail due to lack of papers

Last year there were 65,000 people whose lack of travel documents prevented them from being deported from Germany. Now, though, people who don't cooperate in obtaining new passports will be punished. 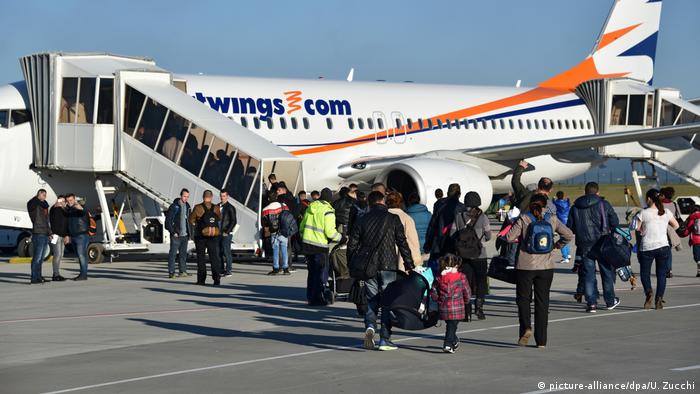 Then 41 and from Nigeria, John (not his real name) received a letter informing him that his application for asylum had been rejected in 2014. At that point, he had been living in Germany for three years.

The immigration authorities want to deport John — but they can't, because he has no passport. He says it was stolen. There's no way of sending someone back to Nigeria from Bavaria without travel documents.

"His exceptional leave to remain keeps being extended, one month at a time," his lawyer, Lothar Panzer, told DW. Panzer provides legal advice for asylum-seekers. "Every month he has to go to the authorities and make sure he gets it renewed," he said.

Read more: Fewer deportations from Germany due to lack of travel documents

According to the Interior Ministry, 65,000 people who should have left Germany were granted exceptional leave to remain last year because they had no documents. That's almost twice as many as the year before. This increase is related to the large numbers of refugees who arrived in 2015 and 2016, Ernst Walter, the chairman of Germany's DPolG police union, told DW. The Federal Police are responsible for deporting people who are required to leave the country.

"It also has to do with the fact that more and more people are trying to disguise their identity to avoid the risk of being deported," Walter said. "And, as the authorities, our job is to establish the rule of law. Of course it can't be that someone who throws away his passport and conceals his identity gets right of residence while the one who was honest is deported."

That's why it's important to clarify the origins and identities of rejected asylum-seekers and get them surrogate passports, Walter said. He added that the Federal Police are particularly well-placed to do this, because they're constantly in touch with police forces in other countries, such as Morocco. According to an internal report by the Interior Ministry that has been quoted in newspapers of the Funke Media Group, cooperation with foreign authorities can often take a very long time. In India, the report says, processing of surrogate passport applications is "sometimes very slow to nonexistent," in Pakistan it is "delayed," and in Lebanon "responses to applications are extremely rare."

The Interior Ministry intends to up the pressure on uncooperative countries of origin — particularly because a lack of documents is currently the most common reason why people are granted exceptional leave to remain. Their leverage here could be "development aid policy, it could be visa policy," said Johannes Dimroth, a ministry spokesman. They want to explore "all possibilities in the bilateral relationship." After all, he pointed out, countries of origin are obliged to take their citizens back.

Ideas like these do not find favor at the Economic Cooperation and Development Ministry. It would rather focus on introducing positive incentives. The minister, Gerd Müller, of the Christian Social Union, has announced that up to €500 million ($616 million) a year will be used to finance jobs and traineeships for returnees to Iraq, Nigeria, Afghanistan and other countries. He hopes that this will convince 20,000 to 30,000 asylum-seekers a year to return voluntarily.

The mere fact that a passport is missing is not proof of displaced people's intent to deceive. Smugglers often take refugees' documents from them, Claus-Ulrich Prölss, the head of the Cologne Refugee Council, told DW. He added that some people also destroy their documents at the beginning of their journeys, because they fear the police or the military in their own countries, as happens in Eritrea, for example.

"Of course a person should and must present their passport if they have one, so their identity is established right from the start," Prölss said. "A passport alone is not sufficient reason to deport someone; there have to be others." Prölss also warns asylum-seekers not to give the police false information about themselves. That could backfire, if not immediately, then later on, when they're well integrated and should be getting residency rights. "That's when people often come in to the advice centers and say they switched the letters in their name, or changed their date of birth," Prölss said. "And that's a problem, because in many cases deceiving the authorities about your identity will disqualify you from obtaining the right of residence."

If they've lost their passports, asylum-seekers must help the authorities to obtain new ones and clarify their identities. If they don't fulfill their obligation to cooperate, the authorities could search their cellphones or their homes and impose penalties. John received a penalty order "for failing to cooperate in the acquisition of papers." He lodged an appeal, but last week the district court decided nonetheless to impose a €700 fine, which is a lot of money for him. In the meantime he has been to the Nigerian embassy and applied for a new passport.