Violence against refugees in Germany drops dramatically | Germany | News and in-depth reporting from Berlin and beyond | DW | 28.02.2018

Refugees and refugee homes are still attacked nearly every day in Germany — but the figures dropped significantly last year. Left-wing politicians blame both the AfD and Angela Merkel's party for stirring up hatred. 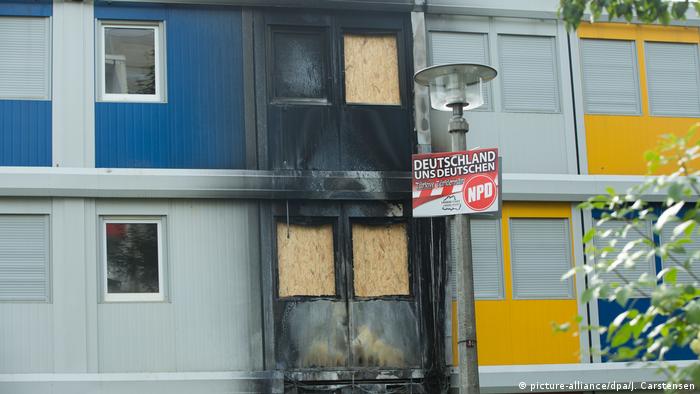 The German government counted 2,219 attacks on refugees and refugee homes in 2017, new Interior Ministry figures revealed on Wednesday have shown. This is a third fewer than in the previous year, when the authorities counted more than 3,500 attacks, but still translates to more than five a day.

According to an Interior Ministry answer to an official parliamentary information request, the attacks broke down into 1,906 attacks on refugees and 313 on homes, with more than 300 people injured as a result.

In its answer, the ministry said that the government "condemned attacks on asylum seekers and institutions where asylum seekers or refugees are staying in the strongest terms. People who have fled their homes are seeking protection in Germany and are right to expect that they can be sheltered safely." 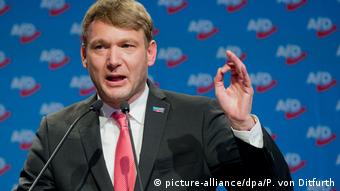 Incendiary speeches by the far-right AfD have been blamed for violence (in the picture: Andre Poggenburg)

Bernd Mesovic, legal director at refugee rights organization Pro Asyl, said the reduction in crime rate was only superficially good news. "For one thing, in the year before, 2016, we had the highest ever number of shelters and people who had to be sheltered," he told DW. "Since then, quite a few refugee homes have been closed again, and fewer homes probably lead to fewer opportunities for attacks. On top of that, a lot of these attacks must have happened outside the homes — so in the street — which does show a certain lack of inhibition."

Despite the relative decline, Left party domestic policy spokeswoman Ulla Jelpke described the attacks as evidence of "an aggressive atmosphere in the country."

Jelpke, who submitted the information request, also blamed the far-right populist Alternative for Germany (AfD) and Angela Merkel's conservative Christian Democratic Union (CDU) for stirring up a fractious atmosphere in the country.

The socialist MP said that the "civil war" rhetoric, often used by the AfD and their associated group PEGIDA, had encouraged people to commit crimes against refugees.

Earlier this month, local AfD leader Andre Poggenburg was condemned after making overtly racist remarks about people of Turkish origin in a speech at a party event near Dresden.

But one of the AfD's most outspoken figures, deputy parliamentary leader Beatrix von Storch, condemned the violence, tweeting, "Every attack is one too many and disgusting. The people coming to us are following a difficult-to-resist invitation from Merkel. It's her fault. Not the migrants'. And we will counter Merkel with arguments. Not with violence."

Jelpke also said the "racist smear campaign" propagated by members of the CDU, "who don't miss any opportunity to demand that the treatment of refugees be toughened," had also contributed to the figures.

The press offices of the AfD and the CDU did not respond to requests for comment.

Is the refugee 'crisis' over?

Mesovic warned that the new figures did not show that the bureaucratic crisis that was sparked by the influx of refugees in late 2015 and early 2016 was being assuaged. "We don't really use the word 'crisis' — there are different aspects to it: some of them really were difficult, while others were exaggerated in the media, and some things have worked well," he said.

What has worked efficiently over the past two years, Mesovic said, was the initial registration of asylum seekers — which includes fingerprinting and identification procedures. "But the problem is that even for refugees whose status has been recognized there is not enough housing. The housing situation is still very, very difficult."

Another problem is that asylum procedures take months to process, and are often completed so poorly that many asylum seekers can make legal appeals against negative decisions — which only extends the bureaucracy that leaves many people in limbo, unsure whether they will be allowed to stay and can look for work.

"A lot of cases are stuck in administrative courts," said Mesovic. "A lot of the decisions are not justified properly, so people have a good chance to overturn them in court."

Long waiting times leave asylum seekers "frustrated and demotivated, because they still only live in temporary housing, and struggle to establish contacts." This exacerbates the risk of crime among refugees as well as attacks on them, because it means people are kept in mass homes in communities far away from urban centers. "Usually, wherever these homes were closed, and people are distributed around communities, we find the problems have calmed down," he said.

Asylum procedures in Germany are processed by the Federal Office for Migration and Refugees (BAMF), which is continuing to struggle with staff shortages.

That problem can't be solved easily, because it takes time to train officials to conduct hearings and make decisions. Here too, there are signs of inefficiency — with new officials often being rushed into what Mesovic calls the "front line" of decision-making after a truncated training course. In many cases, he added, those who conduct the hearings don't make the final decision — which often creates muddled results.

Germany's federal police recorded almost 100 attacks on Christians or Christian institutions in Germany in 2017. Most violent incidents occurred among asylum-seekers living together in refugee homes. (02.02.2018)

The number of people being injured in Islamophobic attacks in Germany has increased this year, new government figures have shown. But very few anti-Muslim hate crimes are successfully prosecuted. (18.08.2017)