A new study has found a direct link between social media hate and subsequent violent attacks on immigrant groups in both Germany and the US. Donald Trump's tweets also triggered an uptick in anti-immigrant crime. 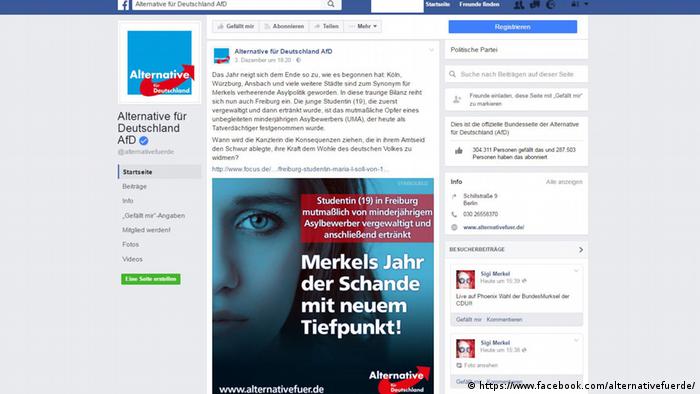 A new academic study has found a direct correlation between social media posts by the far-right Alternative for Germany (AfD) party and hate crime in Germany — to the extent that localized internet outages actually resulted in a reduction in hate crimes in some areas.

Karsten Müller and Carlo Schwarz of the University of Warwick in the UK collected data from the AfD's Facebook and Twitter accounts to "show that right-wing anti-refugee sentiment ... predicts violent crimes against refugees in otherwise similar municipalities with higher social media usage."

Not only that, the study, entitled "Fanning the Flames of Hate: Social Media and Hate Crime," found that "the effect is strongly reduced for municipalities experiencing internet outages in a given week." The academics also found evidence that Donald Trump's tweets predicted hate crimes against specific minorities he mentioned — an effect that has been heightened since Trump became US president. 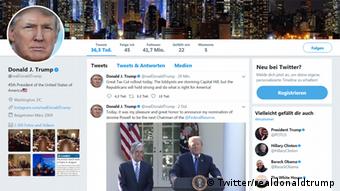 Trump's Twitter feed has been linked to anti-immigrant violence

Graphs in the paper show almost exact correlations between the peaks and troughs in the number of anti-refugee posts on social media and the number of attacks against refugees between late 2015 and early 2017 — the period of Germany's latest major refugee influx. Police statistics show an overall fall in crimes against refugees in 2017, though 264 refugee shelters were attacked this year.

The same holds true for Trump's tweets — the report measured social media sentiment by the number of the president's tweets per week, and matched it with FBI hate crime data. "We find that Trump tweets are a strong time-series predictor of such crimes," the researchers wrote. "Crucially, the effect exclusively works through incidents aimed at the groups targeted by Trump's tweets; anti-Hispanic tweets, for example, have no effect on hate crimes against Muslims, Jews, African Americans, or Whites."

Müller said that the researchers were currently working on finding examples of posts that could be related to specific attacks on refugees or refugee shelters. As a source, the study used data collected by the refugee organization Pro Asyl, which classified different types of crimes against refugees and asylum seekers. "What we saw was that the effect that was most pronounced was violent attacks," said Müller. "When it was other types of attacks — say a group of people standing outside a refugee home saying provocative things — with those things, we did not find the effect of social media." 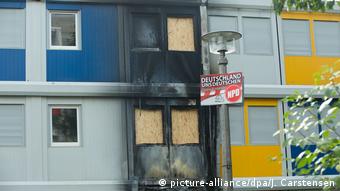 The AfD has the largest Facebook reach of any of Germany's political parties, with close to 400,000 likes on its page. By comparison, Germany's two largest political parties, Chancellor Angela Merkel's conservative Christian Democratic Union (CDU) and the center-left Social Democratic Party (SPD), have around 170,000 and 180,000 Facebook likes respectively.

But in contrast to those parties, the study shows the AfD pursues a more open Facebook strategy — chiefly by allowing users to post directly onto its page. Not only that, the AfD is the only German political party that does not set rules of conduct, for instance, by threatening to delete racist material. As a result, the AfD's Facebook page garners much more interaction than that of other parties.

That was one of the reasons why the study concentrates on the AfD Facebook page, said Müller. "If you look at their page, you just see a massive amount of reaction to anything they post," he said.

As the researchers noted, social media, unlike news outlets, remains largely unregulated. This summer, however, the German parliament passed new legislation aimed at clamping down on online hate speech — by threatening social media companies with fines of up to €50 million ($60 million) if they don't remove posts that violate German hate speech laws. Facebook has also promised to do more against hate speech on its platform.

Nevertheless, Müller was ambivalent about whether such laws could ultimately be effective. "I think there's a strong trade-off — if you follow our study, then you'd say such laws could have an effect, but the question is: at what cost?" he said. "Obviously going down this censorship path is a difficult one, because it's not clear exactly what qualifies as hate speech and what doesn't — it's not like they're all directly saying: we have to kill all the refugees."

In an effort to combat right-wing hate speech, Twitter has now introduced a range of new guidelines for its social network. DW provides you with an overview of what you need to know. (19.12.2017)

German regulators cracking down on hate speech on social media should also look at lesser known players beyond Facebook and Twitter, say experts. They also think it could be a model for others - with one exception. (05.07.2017)

Major tech firms are denying services to white supremacists in response to Charlottesville violence. The crackdown is a rare departure for an industry that has faced criticism for not doing enough to block hate speech. (17.08.2017)