When refugees want to work in Germany

Asylum seekers can apply for a job once in Germany, but only after they have waited the right period of time and if they fulfill certain requirements. 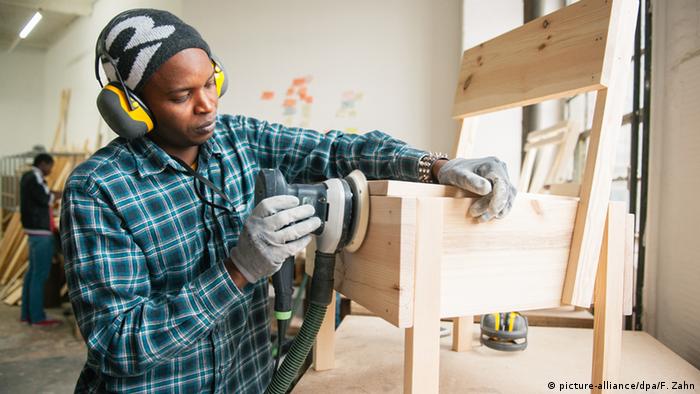 An asylum seeker who made it to Germany may not work during the first three months upon arrival.

And then they only stand a chance if no German or European Union citizen is in the running for the job. This rule is called the priority check, or in German, Vorrangprüfung.

Once the person has been in Germany for 15 months, they don't have to be submitted to this test. But, just like before, the refugee has to get the approval of the municipal immigration office before accepting a job offer.

Generally speaking, the longer an asylum seeker has lived in Germany, the more options he or she has in the area of employment or education. After four years, there are no more restrictions.

But, once the asylum seeker has been recognized he is able to work straight away. But until that happens, many years can often pass. On the other hand, a refugee can also start working if he or she is officially deemed to be tolerated by the state (known in German as "Duldung" on ID cards).

For further information on when refugees are allowed to work in Germany, click here for a set of Questions and Answers from the Federal Office for Migration and Refugees.

How do I find work?

Generally, the Federal Employment Agency is responsible for dealing with job vacancies in Germany. Refugees can register themselves at one of these offices (known in German as Agentur für Arbeit) if they are searching for work. There, they are able to receive advice or assistance.

A number of websites are also useful:

The job vacancy website of the Federal Employment Agency is here.

Click here for job portals, recommended by the Federal Ministry of Education and Research.

There are also many private initiatives which specialize in bringing refugees and employers together. In many cities and towns, some local refugee centers also have notice boards, which are worth checking out.

In just about any sector, good knowledge of the German language is an important qualification. But, a refugee can first get language lessons when he or she has had her asylum status determined. That can often take many months.

How will my qualification be recognized?

The more documents a refugee can show proving his qualifications - vocational training or studies - the better. As a general rule, a qualification will only be recognized in Germany if the relevant documents can be provided.

It may also be possible for refugees to sit a test to prove that they have a particular qualification. In these instances, the asylum seeker is submitted to technical interviews or has to provide a work sample. This only applies to some German states hower.

Germany's Federal Employment Agency has a hotline where refugees can receive some initial advice either in German or English. There, they can also find out how they can get their qualification recognized in Germany – the number is +49 30 1815 1111.

The Ministry of Education and Research has created an online portal where you can get the necessary contact details for the recognition of various qualifications in different fields.

How can I start a traineeship or apprenticeship?

Generally speaking, the same rules apply here as to getting a regular job. Whether you are allowed to start a vocational training or not, depends on your residence permit. If you have "Duldung" status you can start training straight away. But if you have only been granted a temporary stay (known in German as an "Aufenthaltsgestattung") then you have to wait three months until you start.

It's important to realize that even if an apprenticeship is started, it is no guarantee that the asylum seeker will be able to stay in Germany long term. The municipal immigration offices re-examine residency on a yearly basis for trainees.

How do I start studying in Germany?

In most German states, refugees have a right to study. The conditions of study do differ from state to state though. For most degrees in German, a refugee has to be able to speak German at the C1 level, according to the widely-recognized CEF language scale.

In addition, the applicant needs to have an approved school leaving certificate. Some universities make an exception for refugees however, or they just let them take part in lectures as guests. It is important for refugees to inform themselves of the types of offers that are available for asylum seekers wanting to study in their region. The German Ministry for Migration and Refugees has put togetherinformation for students on their website.