Consumer prices rose by over 5% in February, according to new data. With Russia's invasion of Ukraine spiking widespread uncertainty — especially over energy prices — high inflation could be here to stay, experts warned. 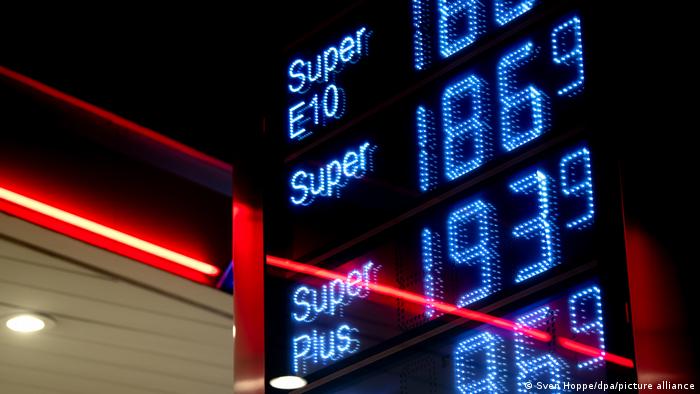 Energy prices are likely to remain high as a result of the Russia-Ukraine conflict, gasoline and diesel prices at German stations have been consistently hitting new records

Germany's inflation rose again in February, according to the latest official data published on Tuesday.

While experts previously expected inflation in Europe's largest economy to gradually ease, Russia's invasion of Ukraine has cast a cloud of uncertainty over hopes for economic recovery.

The inflation rate rose by 0.9% compared to January, officials said in a press release.

This follows monthly inflation of 5.3% in December 2021 — the highest level in nearly 30 years in the country.

Why did inflation rise in February?

The inflation rate in February was primarily impacted by "energy product prices" as well as the ongoing challenges of the coronavirus pandemic, such as "delivery bottlenecks and significant price increases at upstream stages in the economic process," Destatis said.

German officials said that these existing pressures were "superimposed" by further uncertainty caused by Russia's invasion of Ukraine and the resultant sanctions imposed.

Most of the sanctions and market disturbances caused by the outbreak of war came only in the last few days of February, possibly suggesting that these factors could have a more pronounced effect in March, although Destatis did not comment on this prospect.

What is the impact of the Russia-Ukraine conflict?

The conflict and subsequent sanctions from Western nations are already impacting Russia's economy, and are having an effect on energy prices in Europe. Russia is a major supplier of oil and gas to many European countries.

"The development of gas and crude oil prices is likely to remain decisive for the development of German consumer prices in the coming months," Fritzi Koehler-Geib, chief economist at the public lender KfW, told news agency AFP.

She added that if the US and Europe imposed new sanctions, the measures could lead to "new rises."

Michael Heise, the chief economist at financial services provider HQ Trust, said that he expects inflation rates to remain at 5% for the next few months.

"Due to the Ukraine crisis, consumers are not expected to see relief in energy prices any time soon," Heise told Reuters news agency.

Following the release of Germany's data, eurozone inflation figures are expected to be published on Wednesday.

Taking measures to tackle rising inflation will be a central topic when the European Central Bank (ECB) meets next week, with some experts expecting the ECB to more quickly tighten monetary policy to counteract the impacts of the conflict.

Ukrainians in Berlin take their cause to the streets

Despite President Putin's statement on Russia's nuclear alert, observers say it's highly unlikely Moscow could actually start a nuclear war. But given Putin's volatility, his threats can't be taken lightly either.