How could Russia sanctions impact you? | Business | Economy and finance news from a German perspective | DW | 01.03.2022 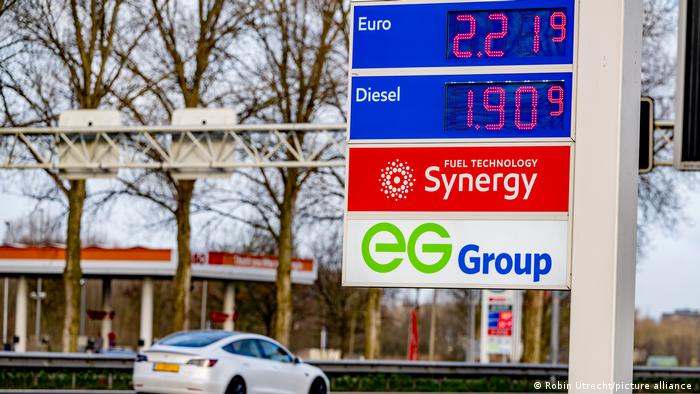 Western sanctions against Russia could push up gasoline prices even higher

French Finance Minister Bruno Le Maire has said the European Union and the United States have launched an "economic war" against Russia, referring to Western sanctions against Moscow that have effectively cut off the country from international financial markets.

The so-called economic war has left Russia facing a financial meltdown with the ruble crashing to record lows against the US dollar, prompting Russians fearing a run on banks to queue up at ATMs in the hopes of withdrawing cash.

However, it's not just Russia feeling the pinch of the Western sanctions, which were unleashed in response to Russian President Vladimir Putin's war against Ukraine. The sanctions are hurting countries from Egypt to Germany, which rely heavily on wheat and natural gas from the parties at war.

DW looks at what would the sanctions against Russia mean for people in other countries.

Oil and natural gas prices soared after another round of Western sanctions on Russia over the weekend as traders braced for supply disruptions from Russia, one of the world's largest oil and gas exporters, and Ukraine, a major transit country for Russian gas.

So far the sanctions have not targeted the energy sector directly, but traders fear that Moscow could retaliate by restricting oil and gas exports and that Western sanctions could be eventually broadened to directly hurt the Russian energy sector, the country's golden goose.

"Russia's energy supplies are very much at risk, either due to being withheld by Russia as a weapon or swiped off the market due to sanctions," Louise Dickson, oil market analyst at Rystad Energy, said in a note.

There are also concerns that shutting out major Russian banks from the SWIFT payments system could make buying Russian oil and gas prohibitively cumbersome. European banks Societe Generale and Credit Suisse are reported to have halted financing of all commodities from Russia.

That's making many anxious in Europe, which gets more than a third of its gas supply and about a quarter of its oil from Russia. Any disruption in gas supply could leave Europeans without enough gas to heat their homes and with exorbitant electricity bills as utilities would be left scrambling for the fuel to generate power.

"So far sanctions seem to be carving out energy and as such the spillover is less severe than it could be. Make no mistake, the risks of a far worse outcome are there,"Deutsche Bank analyst Jim Reid told clients.

The crisis has also ramped up fears about supplies of grains such as wheat and corn, and oilseeds. Wheat futures in Chicago have been surging after touching 13 1/2 year highs on Friday, while corn prices are also trading at elevated levels.

Russia and Ukraine together account for about 30% of global wheat exports, nearly a fifth of the corn trade, and about 80% of sunflower oil exports. Both are key suppliers of wheat to the Middle East and Europe. Turkey and Egypt are the largest importers of Russian wheat.

Experts fear that Russian military operations would further increase food prices in countries like Libya, Yemen, and Lebanon, deepening the food crisis in those countries.

The conflict is already disrupting exports from Black Sea ports, which are used to ship grains to Asia, Africa and the European Union. On Monday, Egypt was forced to cancel a tender to procure wheat after receiving only a few offers, and at very high prices.

For most people around the world, the economic impact of the Ukrainian conflict and sanctions would be felt in the form of higher inflation caused mainly by higher energy, metal and food prices.

Aluminum prices have soared to a record high, surpassing the peak it hit in 2008 during the global financial crisis. Traders fear that sanctions against Russia and retaliatory measures from Moscow could disrupt the global aluminum supply. Russia produces around 6% of the world's aluminum.

The supply of the energy-intensive metal would also be hit by higher energy prices and power shortages which could lead to more plants being shuttered.

"Fresh global supply chain disruptions are a key risk and, at the very least, prices for these commodities are likely to remain elevated for some time, keeping global inflation higher for longer," Jason Tuvey from Capital Economics said.

The invasion risks derailing global economic recovery from the pandemic, complicating matters for policymakers who are expected to tighten the money supply to contain inflation which was hovering at decades high in countries such as the US and Germany even before the war.

The uncertainty around economic recovery could ultimately delay central banks' plans to raise interest rates, which means ultracheap mortgages and personal loans could stay around for a little longer.

SWIFT ban to have 'material impact' on Russian economy