Germany: Angela Merkel's party to decide her successor in January

The new leader of Angela Merkel's center-right CDU party will be announced in early 2021. The party congress, originally scheduled for early December, was postponed due to the coronavirus pandemic. 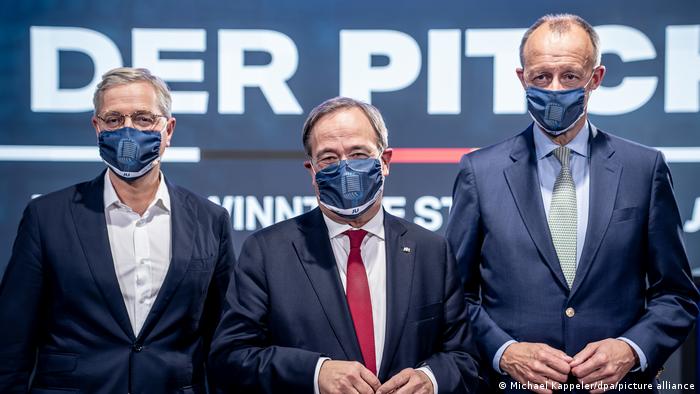 The next leader of German Chancellor Angela Merkel's Christian Democratic Union (CDU) will be decided in mid-January, the party announced on Saturday.

The three candidates — Friedrich Merz, Armin Laschet and Norbert Röttgen — agreed to the date for the party congress, CDU general secretary Paul Ziemiak announced on Twitter. It was originally scheduled for December 4 but was postponed due to the coronavirus pandemic.

"Unity in the CDU is important for Germany, particularly in such difficult times," Ziemiak said. He said the candidates hoped to be able to hold the meeting in person, but that it may take place digitally.

More details will be decided on December 14.

Merkel led the party from 2000 to 2018, and has led the country as chancellor since 2005. She has announced her intention not to seek a fifth term as chancellor.

Defense Minister Annegret Kramp-Karrenbauer took over party leadership in 2018 and had been presented as Merkel's successor as chancellor candidate. However, she bowed out in February after failing to secure public confidence, leading to the new round of leadership selection.

The next party leader would have a strong chance of being picked to run for chancellor, although that is not automatic.

Germany must hold its next federal election by October 24, 2021.

The CDU is polling well after its relatively successful handling of the pandemic. However, infection rates are soaring and voters are bracing for a second partial lockdown and a difficult winter.

Former businessman and conservative Merz, 64, is polling better than both Laschet, 59 — who is premier of the state of North Rhine-Westphalia and more liberal — and Röttgen, 55, a foreign policy expert. But the party elite favor Laschet.

The CDU is the largest party in the Bundestag and leads Germany in a coalition with its Bavarian sister party, the Christian Social Union (CSU), and the Social Democrats (SPD).

Merz has accused "parts of the party establishment" of acting to prevent him from becoming leader.  Politics Podcast: Merkel's Last Dance

The open accusations are unusual for the traditionally disciplined party, prompting current chairwoman Kramp-Karrenbauer to urge the candidates not to engage in "discussions that damage the CDU as a whole," in comments to Der Spiegel news magazine.

After Saturday's announcement, Merz said on Twitter that he "very much" welcomed the agreement: "It is a good compromise that we have agreed on today.

Laschet also declared on Twitter that the CDU needs "clarity for the next year."

"Our joint proposal serves this purpose," he added.

Röttgen too said he was very pleased "that we have come to a good solution for the federal party congress together."