Germans woke up on Thursday to the traumatic news that a man had killed and eaten another man with the victim's approval. The deed was allegedly recorded on video. 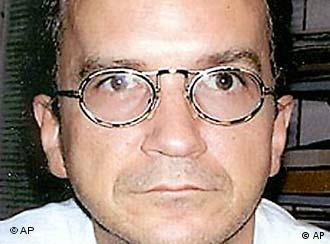 The alleged victim, 42-year-old Bernd Juergen B. from Berlin

For a day at least, Germans may have forgotten about their economic woes as the country found itself hitting the headlines over an altogether more frightening story.

Police have arrested a man who claims to have killed and eaten a friend and recorded the deed on video, allegedly with the victim's approval. The 41-year-old suspect from the picturesque Hessian town of Rotenburg told police that he met his 42-year-old victim, microchip engineer from Berlin, via the Internet. He said they shared homosexual and cannibalistic leanings.

Police said they found the video along with deep-frozen flesh and skeletal remains when they searched the suspect's flat. The video allegedly shows the suspect and the victim agreeing on the murder. Forensic experts are searching the house and surrounding areas for the remains of other possible victims.

The killing goes back to 2001. Police only stumbled across it after the man placed another ad in the Internet looking for a man willing to allow himself to be killed and eaten.

The last alleged case of cannibalism in Germany dates back to 1995 when a 33-year-old man standing trial for murder and robbery claimed to have eaten parts of his victim, however, his claim was never proven.

Police say the suspect is not mentally disturbed. A spokesman said had that been the case he would have been placed in a psychiatric unit instead of a detention cell.

The man is being held on suspicion of murder which carries a life sentence. Should his story check out, he would only face a charge of so-called murder by demand. A conviction would be punishable by a maximum of five years in prison.