Two leading Social Democrat members of Chancellor Angela Merkel's cabinet have called for an EU-wide asylum policy as a way of coping with an unprecedented influx of refugees. Merkel made a similar call one week ago. 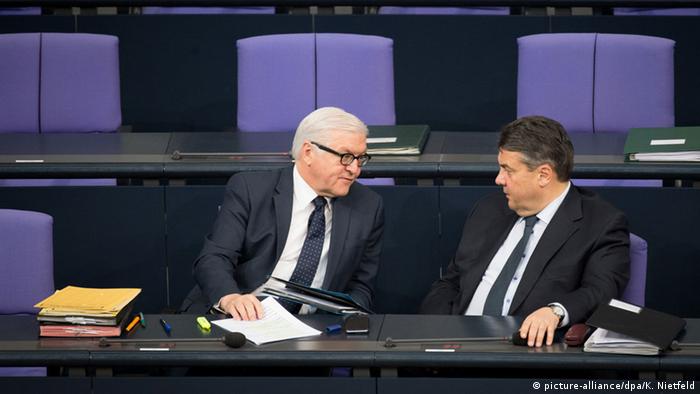 Foreign Minister Frank-Walter Steinmeier (pictured, above left) and Economy Minister Sigmar Gabriel (above right) used an article published in this Sunday's edition of the newspaper "Frankfurter Allgemeine Sonntagszeitung" to pitch the idea.

In the article, in which their names appeared as the co-authors, the two ministers asserted that due to the crises "in our neighborhood," the growing number of refugee and migrant arrivals does not appear set to end anytime in the foreseeable future.

"We Europeans owe it to ourselves and the world to do justice to the great challenge presented by these people seeking help," they wrote, before adding that the European Union's response as a whole had not been satisfactory.

They then went on to call for a joint EU asylum, refugee and migration policy, outlining a 10-point plan to implement it.

Among the highlights of the 10-point plan is a call for a "fair distribution of refugees in Europe."

While the two ministers pointed to what they wrote was an unprecedented readiness by many of their fellow citizens to accept refugees and help them become integrated into German society, they also warned that this could not last if the unprecedented influx was not fairly distributed.

They also called for urgent assistance for EU countries that have been hardest hit by the wave of migration, such as Italy and Greece, which are where many of the refugees have been first entering the bloc. Recognizing the strain that municipalities, in Germany have also been under, as they struggle to cope with what is projected to by around 800,000 arrivals by the end of 2015, they also called for "long-term and systematic" financial support for their efforts.

Touching on an idea that has mainly been championed by members of Chancellor Merkel's Christian Democrats in recent weeks, Steinmeier and Gabriel called for an EU list of "safe countries of origin." Germany has already designated a number of countries as such, and may add to its list, which includes countries that aspire to join the 28-member bloc. The two ministers noted a contradiction in the idea that countries in the Western Balkans could be deemed eligible to qualify for EU Association Agreements, while at the same time not being regarded as safe countries of origin for people seeking asylum in the bloc.

Almost half of the people who have arrived in Germany so far this year seeking asylum status have come from the Western Balkans and stood almost no change of being granted asylum.

The two ministers highlighted the need to send those who did not qualify for asylum back swiftly, in order to free up resources for refugees in need of protection.

Finally, Steinmeier and Gabriel note that the only way to combat the problem in the long term was to look for ways of improving the situation in the countries that people are feeling forced to flee.

"The stabilization of countries that are falling apart, the containment of violence and civil conflict, must go hand in hand with concentrated efforts towards economic development and the creation of real economic and social prospects in particular for young people in their countries of origin," the two cabinet ministers concluded.

Their proposals come a week after Chancellor Merkel used a feature interview with public broadcaster ZDF to call for a common EU policy on migration.

Also on Sunday, Italy's foreign minister warned that EU member nations needed to find a way of better coordinating efforts to deal with the crisis, saying this could threaten the existence of the bloc's border-free Schengen zone.

"What is at risk is one of the fundamental pillars of the European Union: the free circulation of people," Paolo Gentiloni told Sunday's edition of "Il Messagero."

"Can we imagine a Union without Schengen? A return to the old borders? He asked. "Migrants are not arriving in Greece, Italy or Hungary. They're arriving in Europe. That is why the reception rules have to be 'Europeanized'."

German President Frank-Walter Steinmeier has said the Catholic Church needs to be more transparent about abuse scandals. He and the pope also criticized a lack of coherent EU immigration policy with regard to refugees.