German Interior Minister Thomas de Maiziere has condemned violent protests against a refugee shelter in the eastern town of Heidenau. At the same time, he highlighted a spirit of giving demonstrated by other Germans. 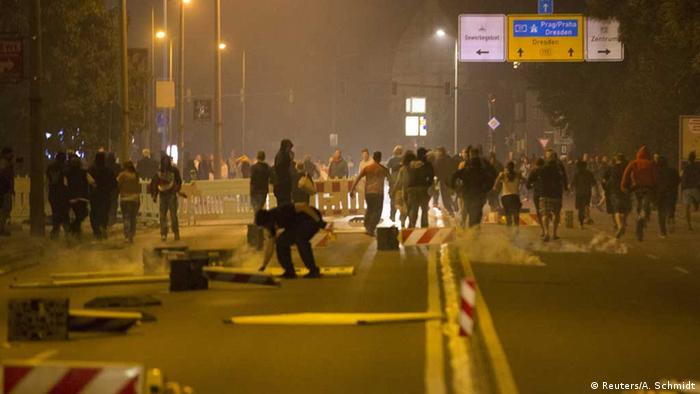 In comments published in the German "Bild am Sonntag" newspaper, the interior minister decried not just the violent protests against refugees over the past couple of nights in Heidenau, located just outside of Dresden, but all other attacks on asylum seekers' shelters in recent months.

"This is unsavory and unworthy of our country," de Maiziere said. "Everyone who thinks like that should try just for a moment to put themselves into the situation of the refugees. We will bring the full force of the law against anyone who takes such action," he added.

However, speaking to public broadcaster ZDF earlier, de Maiziere also noted that many Germans had come forward to provide assistance to the refugees, many of whom have fled armed conflicts in places like Syria or northern and western Iraq.

"We have (observed) a huge wave of readiness to help others," he noted, in contrast to a simultaneous "increase in hate, insults and violence against asylum seekers."

Meanwhile, there was more unrest on Saturday night in Heidenau, a town that was likely hardly known beyond the eastern state of Saxony before anti-refugee protests began there one night earlier.

News agencies reported that between 150 and 200 protesters demonstrated outside the shelter. The first refugees had arrived early on Saturday, after police used tear gas to break up a street blockade aimed at preventing the buses carrying the asylum seekers from getting to their temporary destination.

Although the number of demonstrators was far fewer than the estimated 600 to 1,000 who had taken part in the protest 24 hours earlier, police again were pelted with rocks, bottles and firecrackers.

Police, who were in place to guard the shelter from such attacks, responded by using batons against the violent demonstrators, some of whom appeared to be under the influence of alcohol, according to the Reuters news agency.

The DPA news agency cited a police spokesman in Dresden who said that two officers were injured in the latest clashes.