Italian navy rescues more than 1,200 migrants from the Mediterranean

The Italian coastguard and navy have saved the lives of hundreds of refugees and migrants in the Mediterranean. The troops are trying to rescue up to 4,000 people from 22 boats. 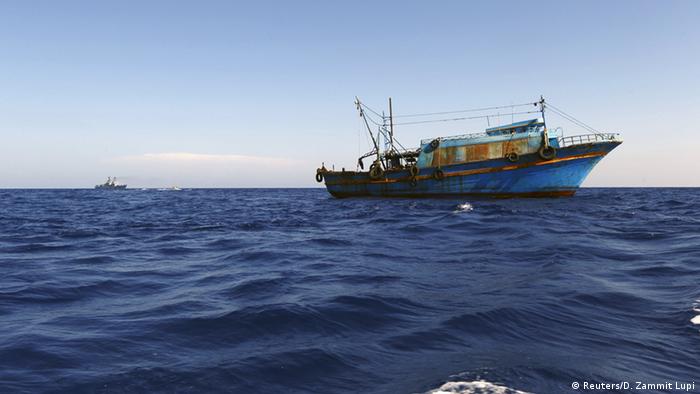 Coastguards and naval officers in Italy were working to rescue thousands of migrants travelling in flimsy boats from Libya to Europe across the Mediterranean on Saturday.

Two navy patrol ships, the Cigala Fulgosi and the Vega, had picked up 507 and 432 migrants, while coastguards had taken about 300 people traveling in dinghies on board.

"More than 3,000" refugees from 22 vessels had launched distress calls from off the coast of Libya, Captain Marco Di Milla, a spokesman for the Italian coastguard, told the news agency DPA. The Italian navy, the customs police and a Norwegian ship participating in the EU's Triton border patrol mission were pitching in for the rescue action, he told reporters.

Saturday's operation was being considered one of the largest single-day rescue mission since migrants began pouring into the EU last year. Migrants travelling on one of the boats said their vessel was packed with more than 10 times the number of people it was designed for. Many passengers, including a number of women and children, had been locked below the decks.

Each of them paid 2000 euros ($2,200) to the traffickers for the passage from Egypt to Italy, they said in statements to the police.

About 170,000 people escaping conflict and poverty in Africa, the Middle East and South Asia landed at Italy's southern ports in 2014 after being rescued by EU sea missions in the Mediterranean.

This year, the number of refugees landing on Italy's coasts has topped 100,000 so far. More than 135,000 have landed in Greece, raising fears that Europe may be unable to cope with the unprecedented influx of asylum seekers.

Germany cannot continue accepting refugees at its current pace of 800,000 per year, its interior minister warns. The country could reinstate border controls if other EU states fail to pull their weight. (20.08.2015)