The foreign ministers of Germany, Sweden and Japan have visited a Rohingya refugee camp in Bangladesh. German representative, Sigmar Gabriel, says it is necessary that refugees go back to Myanmar and rebuild their lives. 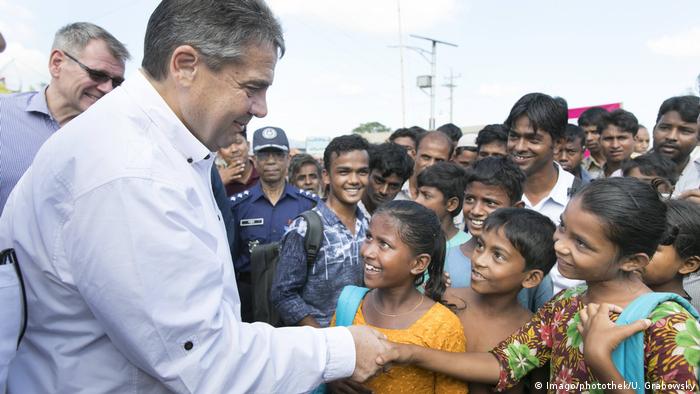 Sigmar Gabriel, the German foreign minister, was accompanied by Taro Kono of Japan and Margot Wallstrom of Sweden on his Sunday visit to a refugee camp in Bangladesh's Cox's Bazar district.

The UN estimates that since August more than 600,000 Rohingya Muslims have fled to Bangladesh while being pursued by the Myanmar army.

Myanmar authorities are accused of carrying out a brutal and indiscriminate purge against Muslims. The violent crackdown came in response to attacks by Muslim insurgents on military security posts in Rakhine state in August.

The foreign ministers' visit to the refugee camp comes ahead of a meeting in the capital Dhaka with the Bangladeshi Prime Minister Sheikh Hasina. Bangladeshi Foreign Minister Abul Hassan Mahmood Ali accompanied the ministers to the Kutupalong refugee camp near the border with Myanmar.

Talking to the media at the refugee camp, Gabriel said that Germany wanted to be more engaged in the international response to deal with the Rohingya crisis.

"Together with other colleagues from Sweden, from the European Union, from Japan, we want to have a discussion about the situation in Bangladesh and the Rohingya in Myanmar … Germany has decided to be more engaged, to pledge more to help the refugees and the local communities," Gabriel told reporters, including Harun Ur Rashid, DW's correspondent in Dhaka.

The German foreign minister stressed that the international community must find solutions so that the refugees could go back to their homes and rebuild their lives.

While talking about the refugees, Gabriel also used the term "Rohingya," which DW Bengali department's Arafatul Islam says foreign diplomats usually refrain from employing. Myanmar objects to the term in any UN resolution and says it makes the government's efforts more difficult in addressing the issue.

Myanmar's government has so far refused to grant citizenship to the Rohingya. It views the estimated 1.1 million people as illegal immigrants from neighboring Bangladesh.

The Rohingya are an ethnic minority in Myanmar, which originates from the Indian subcontinent. For several centuries they have lived predominantly in Myanmar's western state of Rakhine also known as Arakan. They are predominately Muslim.

They are not officially recognized by the government as citizens and for decades Myanmar's Buddhist majority has been accused of subjecting them to discrimination and violence.

On August 25, violence broke out in Rakhine when around 100 armed Muslim insurgents attacked security guards in the border region with Bangladesh. Myanmar's security forces and Muslim minority Rohingya militants accuse each other of burning down villages and staging mass killings.